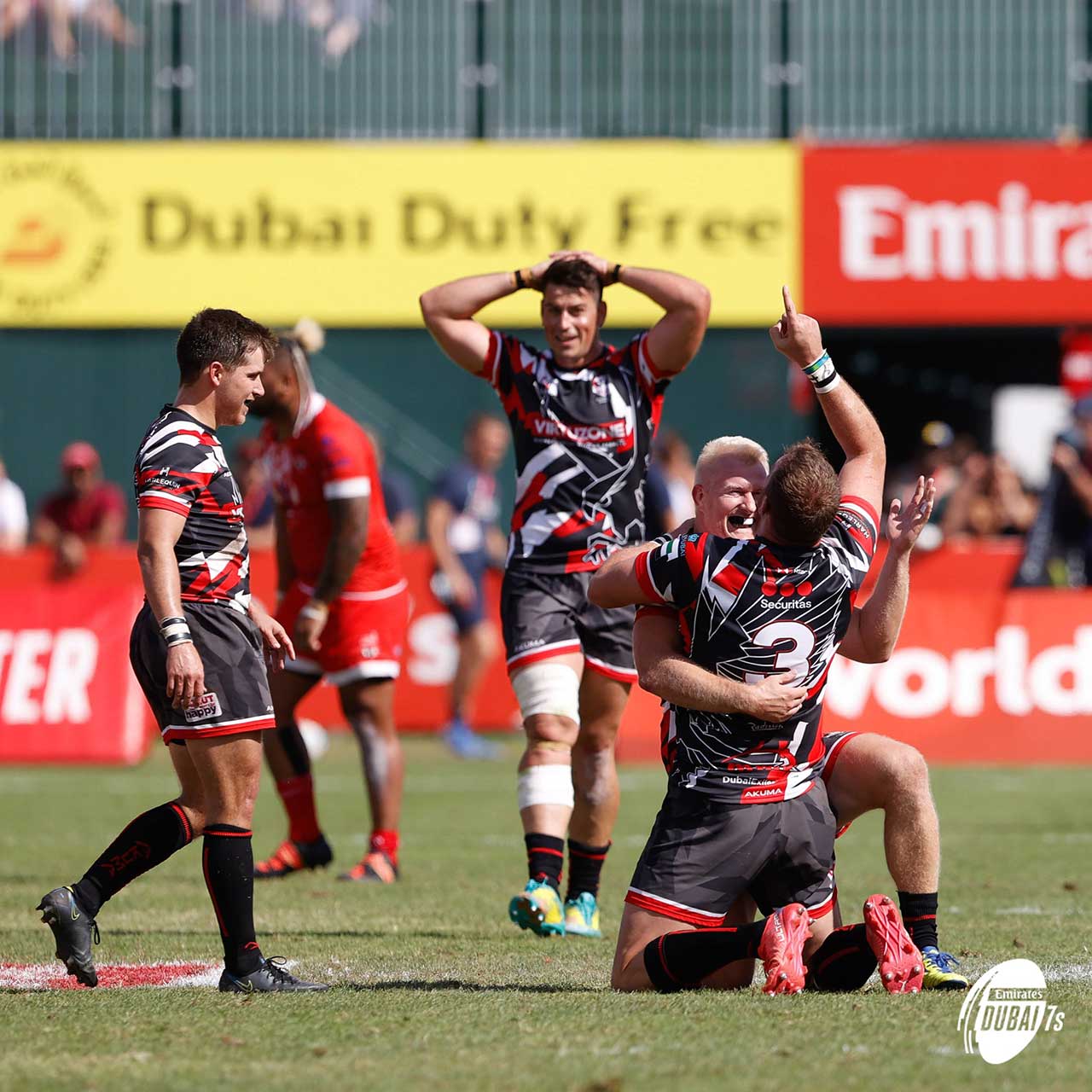 It was 4 years since the Dubai Exiles had last won The Emirates Dubai Sevens Gulf Men’s title. That 2017 December morning had seen the Exiles plunder the final on Pitch 1 against a much fancied Jebel Ali Dragons outfit with a 19 – 12 smash and grab decided in the final minute. The Exiles’ Under 19 Girls had shown the way the evening before the men’s final by taking the Gulf Under 19 Girls title.

Carel Thomas gets ready to feed the scrum

Conor Kennedy causes the usual havoc in the opposition defence

The first of the Dubai Exiles RFC pool matches was against the number 1 seeds, Emirates Dubai Sevens defending champions, and next door neighbours the Dubai Hurricanes. It was almost a month since the two sides had met in the 15 man form of the game in the UAE Premiership. That evening the Exiles had put the Hurricanes to the sword, winning by 59 points to 17.

We all know that seven-a-side is a completely different game but the form book was thrown out of the window in this hotly anticipated match-up. The banks around pitch 2 were a kaleidoscope of different colour and spectators fervent with a party atmosphere. When the final whistle was blown, it was more relief than joy. The Dubai Exiles had snuck over the winning line with a 12 – 10 win. The Exiles dominated most of the match, but handling errors often stopped momentum at crucial monents. The ring rust had definitely been shaken off by the end of this game.

Abu Dhabi Saracens provided the opposition for the second Exiles‘ pool match, it was quite a late Thursday evening kick-off, 8.20pm, but by the time the clock had rolled around on to 8:45pm the Exiles had run in 8 tries and finished the opening Thursday with 2 wins out of 2.

It was another Abu Dhabi team, the Harlequins, up next for the Exiles. The Zayed Sports City based outfit had been going great guns in their opening two matches, dispatching the Saracens 45 – 0 and then rolling over the Dubai Hurricanes by 40 points to 17. By any definition, this was going to be another tough outing for the Sevens based Exiles, the Harlequins were looking good.

It was another outing on pitch 2. The Emirates Dubai Sevens second pitch had built itself into a popular destination for many Sevens goers. A great atmosphere, good music, Gulf and Invitational games mixed in with International matches from the HSBC World Rugby Sevens Series had made the grass covered banks a popular place to watch proceedings.

If you were sat overlooking pitch 2 at 6pm on the Friday evening, you’d have witnessed an absolute belter of a game. It was fast, it was physical, and it was intense all the way through to the end. The Harlequins had certainly come to The Emirates Dubai 7s looking to make a significant impact. The Exiles would have been faced with a very different route to the final if they’d lost this match, with less than a minute to go in the game, that alternative route looked reasonably likely. It was Exiles‘ Matt Mills who provided the trump and final card, his score at the death ensured the Exiles remained unbeaten, topped Pool A, and guaranteed a Quarter Final place against Dubai Hurricanes B.

The Quarter Final against Dubai Hurricanes B was another late evening kick-off, this time 8pm out on pitch 5. In the other Quarters, Abu Dhabi Saracens were taking on a good looking Dubai Tigers outfit, Harlequins were heavily favoured to beat Bahrain, and the Dubai Hurricanes A side were playing 2017 finalists, the Jebel Ali Dragons.

It was mostly one-way traffic for the Dubai Exiles against the Hurricanes. When the 14 minutes was up the Exiles had scored 7 unanswered tries and cruised to a 45 – 0 win. In the other matches, the Dubai Tigers had overrun the Abu Dhabi Saracens 50 – 0, and the Jebel Ali Dragons had knocked out Hurricanes A by 26 points to 19. The big surprise was Bahrain beating the Abu Dhabi Harlequins by 26 points to 24. Bahrain had been fairly innocuos through the pool matches, losing 36 – nil to the Tigers, a close 14 – 17 defeat to semi-finalists the Jebel Ali Dragons and then creeping past Dubai Hurricanes B by 14 – 12.

By 9.20 am on the Saturday morning the finalists were in place. Dubai Tigers had removed Bahrain from the competition winning their match 27 – 7 and the Dubai Exiles had knocked out the Jebel Ali Dragons winning by 33 points to 7. Next stop was the showcase Pitch 1, an 11:40am kick off. It was going to be a hot one.

Many of the Dubai Exiles’ represent the UAE on the International stage in both 7s and 15s rugby.

It was hard to call a favourite in this match. If you were a Tigers fan, Tigers were favourites, if you were an Exiles supporter, the Exiles were favourites. One thing was for sure, there were a lot of players in the Tigers squad who were not on the pitch during the Exiles‘ 91 – 0 demolition job on them in the UAE Premiership opener in October.

Conor Kennedy got things under way and immediately put the Exiles on the attack. Jaen Botes had regathered the kick off and given win, Schalk du Preez a sniff of a break before being bundled into touch. The Tigers were quickly on the attack after an Exiles turnover. Exiles scrum-half Carel Thomas had looked for space on the right side, but after he was scragged, former Dubai Hurricanes centre, Saki Naisau, grabbed the ball and took off down the wing. The Fijian flyer was quick, but luckily for the Exiles he wasn’t quick enough to get away from the chasing Conor Kennedy.

The Exiles were the first to score, Saki Naisau was penalised for holding onto the ball. Epeli Davetawalu had made the tackle and with Jaen Botes ready to pinch the all important egg, Naisau held on to the ball too long and was promptly penalised by the referee. Conor Kennedy tapped, a couple of changes of direction which befuddled the Tigers‘ defence and the ball was floated to gas merchant, Schalk Du Preez, for the opening try. 5 – 0 Exiles.

Anthony Kapp gets ready to go ‘red route one’ with Carel Thomas tracking.

The next 30 seconds turned the game on its head. From the restart Exiles‘ Justin Walsh received a yellow card for what the referee, but nobody else, judged to be a high tackle on the receiver. As Walshy trotted off to the naughty chair, Jaen Botes was soon following him 15 seconds later. The referee, but nobody else, well, maybe some Tigers‘ supporters, had judged that the big South African had deliberately knocked the ball on in a tackle.

In a Sevens match if you have 5 against 7 the outcome is inevitable, right? The only question is how many tries will be scored, right? Well, on this occasion the inevitable just didn’t happen. The Dubai Tigers were straight onto the offensive, Brad Oawko worked his socks off to get across to snuff out a the Tigers‘ first, and only, onslaught. After Brad‘s heroics, desperate tackles forced the Tigers into an inexplicable forward pass, it was just as well, there were two Tigers‘ players ready to receive the ball and either one of them could have walked the ball across the try line.

Exiles were given the scrum and that was that. Epeli Davetawalu, Robbie Sproul, Brad Oawko, Conor Kennedy and Carel Thomas simply held onto the ball, ruck after ruck, after ruck, the penalty clock evaporated. With still only 5 on the pitch, Conor Kennedy worked some space to attack, slipped a tackle and passed the ball to Justin Walsh who’d literally just come off the naughty chair.  Walshy, who apparently is officially the biggest outside half in world rugby, bulldozed his way over the top of the first defender and took the next 2 with him across the try line. Converted by Conor Kennedy. 12 – 0 to Exiles. Half Time.

Justin Walsh looks for someone to run over

‘Kappy‘ and Robbie Sproul ready to receive the kick off

The second half kicked off and the Dubai Tigers put themselves straight back into the game. A show and go, a missed tackle in the middle of the field and the Tigers were under the posts with the simplest of tries, much to the dismay of the usually tranquil Exiles‘ Director of Rugby, Jacques Benade. 12 – 7.

The game was on now. From he restart, the Exiles began to move the ball from side to side, making yards with each sweeping attack. Carel Thomas almost caught the Tigers‘ defence napping down the blind side but another former Dubai Hurricanes player, Mossy Vacanaua, just managed to get one of his considerable paws onto Carel and push him into touch.

The Tigers throw in was somewhat skewed, and from the resulting scrum the ball was spread, quickly, wide to the left. Robbie Sproul almost broke the defensive line but was collared when he looked like he had found a gap. The ruck formed and Conor Kennedy was quickest to react, picking the ball up and heading down the blind side, a solid fend, and Conor was across for the Exiles‘ third try. Converted from out wide by Conor. 19 – 7 to Exiles. Clock ticking and celebrations on the Exiles‘ bench.

Jaen Botes created his own space

The Dubai Tigers weren’t done yet. After the Exiles had given away a somewhat soft penalty in the Tigers‘ 22 they again managed to punch a hole down the middle of the pitch and run to the posts from 60m out. Converted. 19 – 14.

Frantic enquiries were now being made to the Pitch Manager, Hermann Frankfurth about how much time was left in the game. The Exiles received the restart and immediately sent the ball out to Schalk du Preez out on the left wing. Some dancing feet and Schalk almost went through the Tigers‘ defence. The ball was moved left to right, Anthony Kapp decided to straighten things up for the Exiles and in doing so bounced Tigers‘ Mossy Vacanaua back across the half way line when the big Fijian looked like he had him tee’d up. Mossy‘s frustration was clear, and when he caught up with ‘Kappy‘ a frustrated swinging arm gave a penalty to the Exiles with time almost gone.

With the Tigers’ defence walking back, Conor Kennedy again took a quick tap, when the referee gave him the all-clear to play, the ball was moved to Robbie Sproul. As soon as Robbie saw that he had a one on one with a Tigers‘ defender, the Exiles‘ flyer put his foot on the ‘go peddle’ and scored in the corner. 24 – 14 to Dubai Exiles RFC. Full Time.

Route to the Title