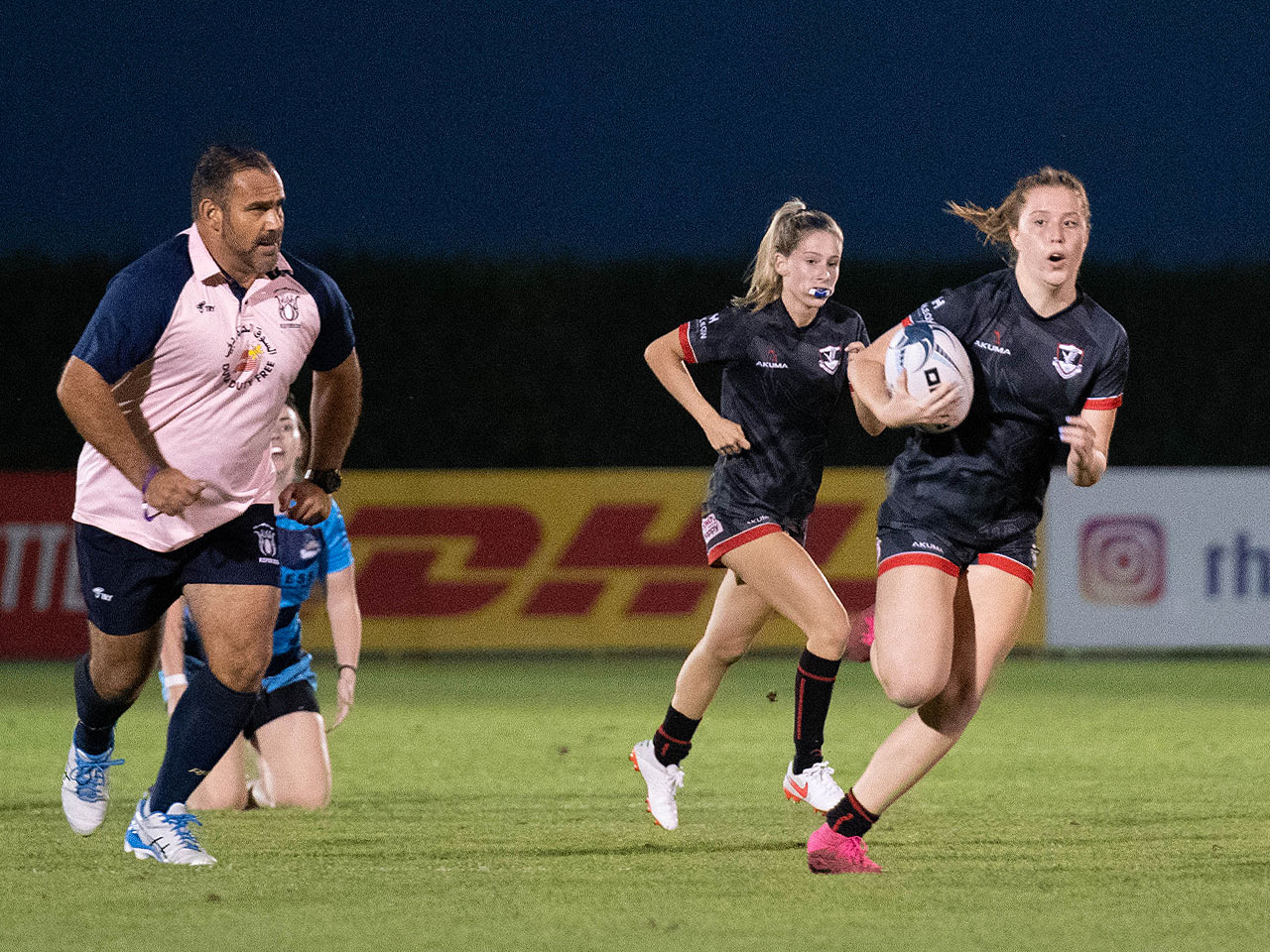 After the Exiles U19 Girls had taken their first soiree into senior ladies’ rugby in a friendly tri-tournament at The Sevens, it was time to see how the ladies of Dubai Exiles RFC would fair in their first senior competitive match against Dubai Sharks Ladies.

For the first time the Exiles Ladies match was being streamed live on the Club’s Facebook channel https://www.facebook.com/DubaiExilesRFC/videos/164239088907383 and the ladies of Dubai Exiles RFC certainly didn’t disappoint their gathered audience. Over 400 people tuned in and watched friends, family and loved ones on the world class pitches at The Sevens.

Dubai Sharks Ladies got things underway, kicking off from right to left. It wasn’t the most auspicious start. The ball failed to go the prerequisite 10 meters and Exiles Ladies were handed the ball on the half-way line.

The opening exchanges were quite tense as the players settled into the game, a series of rucks ensued which resulted in an over enthusiastic clear-out from a Sharks player, and the ball was exposed to be picked up by the Exiles’ scrum-half. A hard drive from Heather McNaughtan, a quick pass, and then Carmen Smit found herself in acres of space and unopposed to score under the posts. Converted. 0 – 7 to Exiles Ladies.

The Sharks reply was immediate. Just as Exiles Ladies were thinking that UAE Ladies rugby was going to be easy, Dubai Sharks Ladies fielded the restart and headed straight down the middle of the pitch to the Exiles’ try line. A missed tackle and Sharks were on the scoreboard. 5 – 7 after just 3 minutes.

There was no time to take a breath. The next score was a sweeping one from Exiles Ladies. The Sharks restart found its way into touch and a perfectly executed lineout by the Exiles just outside their own 22 saw the ball swept across the back line from right to left. Charlotte McNaughton was the wing who received the ball after some deft handling by the Exiles backs, when she received the ball in her own 22 she took off on an 80m run to score. 5 – 12.

The third try for the Exiles Ladies was quick to follow. A loose kick from Dubai Sharks Ladies was pounced on. The ball quickly found itself in the hands of Carmen Smit who again worked herself into space and outpaced the Sharks’ defence. 5 – 17 at the end of the first period.

Straight from the kick-off and Exiles Ladies were on the attack again. The Sharks’ defence was left stranded by the quick feet of Jess McKillop as she crossed for the opening score of the second period. 5 – 22 to Exiles Ladies.

The Sharks were trying to move the ball and find space, but the Exiles Ladies defence was displaying a newly found ferocity and stopping their opponents deep behind the gain line. There was an inevitability about the next score, Exiles had moved the ball from left to right, and as the typewriter moved to reset itself, Isabel Ellis spotted the smallest hint of a gap between two Sharks defenders and ran under the posts to score. 5 – 27.

Exiles Ladies certainly had their tails up at this point, they were enthusiastically hunting down and snuffing out any would be Sharks’ attack. It was left to Jess McKillop to have the final word of the second period of play. The Exiles defence had forced another loose kick from the Sharks, and some excellent support play down the right-hand side of the park saw Jessica again leave the Sharks defence floundering. 5 – 32 Exiles Ladies.

Lily Christiansen on the shark hunt

From the opening of the third period of play, things were beginning to look concerning for Dubai Sharks Ladies. Liv Pollard had been busy throughout the first half of the match and got her just rewards from the very first ruck after the restart. The Sharks Ladies were clearly concerned about the Exiles pace out on the wings, while fixated on that problem they forgot to guard the edges of the ruck, a show and go, and Liv gratefully accepted the donated space as she set off on a 60m run to score. 5 – 37 Exiles.

The next score was arguably the try of the match. An Exiles free kick in their own half was tapped and the ball moved into midfield. Some fantastic support play and a loop opened up the space, quickness of thought to drop back into the line, and Charlotte McNaughton was away. 5 – 42.

You might have expected the Sharks Ladies heads to drop at this point. It’s full credit to them that they kept working and looking to play rugby. A concerted attack down the left-hand side of the field and they suddenly found themselves behind the Exiles’ defence, much to the delight of their supporters. The ball was moved infield and across the line close to the posts. 10 – 42, end of the third period.

Liv Pollard heads to the posts

A Dubai Sharks player looks on

The Sharks Ladies had certainly found a new confidence. Some excellent approach work had allowed them to make their way to the Exiles’ 22. It was only the last pass that went astray and snuffed out what should have been a very promising attack. Unfortunately for the Sharks Ladies, on this occasion, the last pass was gratefully grabbed by Exiles Ladies, two passes later and Isabel Ellis was again away for a long run to the Sharks try line. 10 – 49.

The next Exiles’ try ended the match as a competition. Sharks had been working tirelessly to make an impact on the score, but a try from Jania Vandevoorde ended any hopes of bringing balance to the points difference. 10 – 54.

The final word went to the Exiles Ladies. As the clock went red, another attack from outside their own 22 saw the very impressive Courtney Gorman again outstrip the chasing Sharks defence and bring to a close a very impressive first outing in competitive senior ladies rugby for the Dubai Exiles. 5 – 59 Final Score.