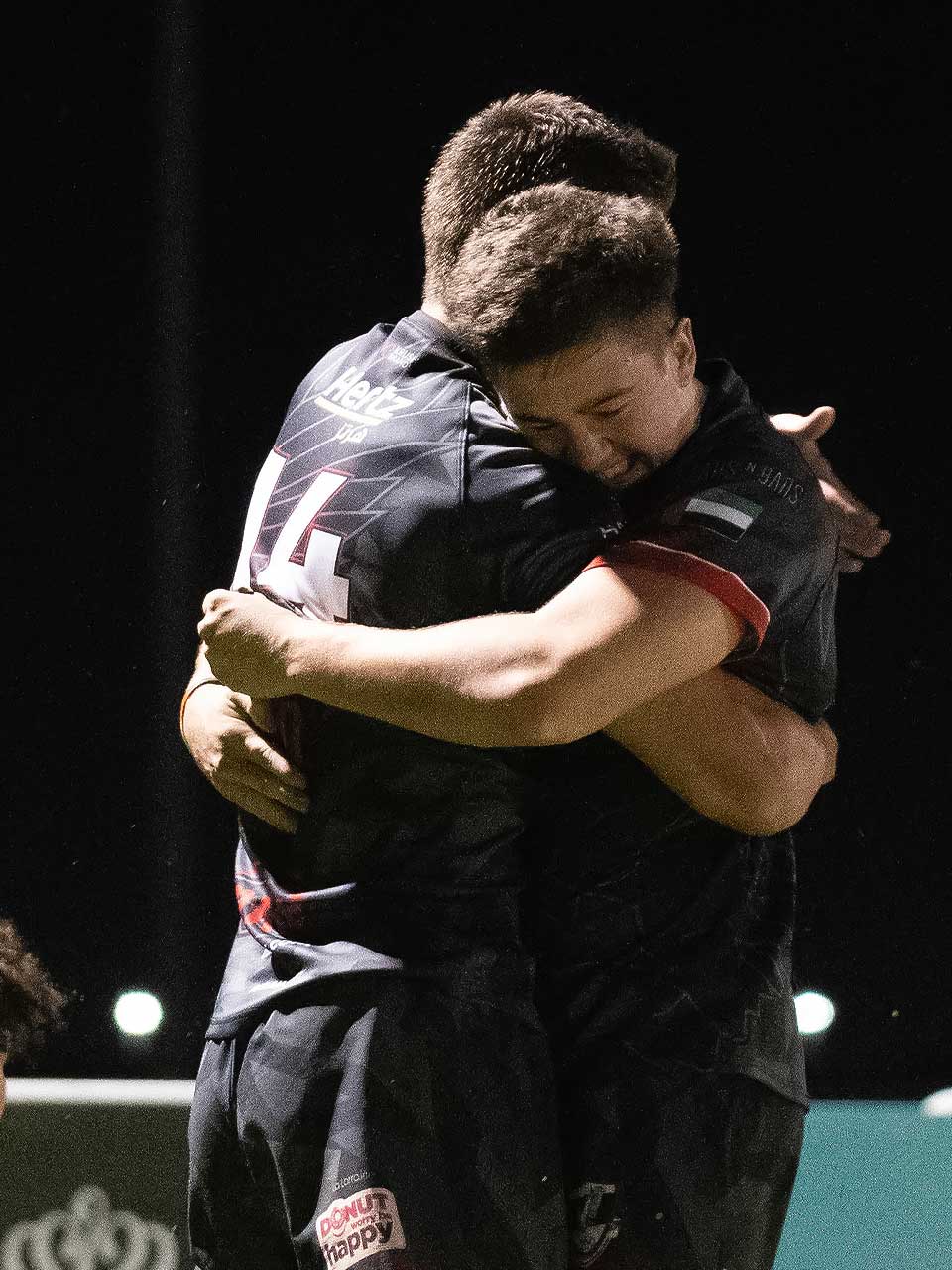 The Exiles confined the opening 10 minutes of their Northern Emirates Premiership match with Dubai Hurricanes RFC to the annals of history in record time. It might have been nerves, it might have been the 7.30pm evening kick off, but whatever it was it needed to be evacuated from their system – and quickly.

DuRandt Gerber gets things under way

The Hurricanes kicked off and there was an immediate meaningful contribution to the game from the men in black. A long pass from under the posts knocked on in their own 5m. The UAE Premiership Champions had put themselves under immediate and unnecessary pressure. From the resulting free kick, the Hurricanes immediately looked to move the ball wide to the left but laboured passing to stationary receivers didn’t help their quest for the try line.

Play was pulled back by match referee, Simon Dodd, to the middle of the 22 for an Exiles off-side. The Hurricanes faired a lot better when some direct running opened up space on the left-hand side for the ‘Canes number 10 to cross for the game’s first score. 5 – 0 to the home side, only 2 minutes played.

As play resumed, the ball was sticking to Exiles’ hands in much the same way as a freshwater eel, raw from a tour of a soap producing factory, who’s just taken first prize in the world bog-snorkeling championships, sticks. Three minutes of the first period had passed, Exiles had had the ball twice and knocked it on twice. There were signs that space could be found if the Exiles could manage to not drop the ball. After luckily retaining possession in their own 22, again after throwing some wild passes, the ball had managed to find its way out wide to the left, and when it seemed harder to not score than to score, Exiles knocked the ball on – again. With the referee not having yet blown for the offending dropped ball, the Hurricanes looked to attack with most of the Exiles defence facing the wrong way, half asleep and anticipating a free kick.

The free kick was eventually given after the Dubai Hurricanes had failed to capitalise on the Exiles’ carelessness. Everything was going the way of the team in canary yellow. If you were being generous, you’d say that the Exiles were doing well to keep the ‘Canes from crossing their try line. Some rest bite did come when Epeli Davetawalu manufactured a huge amount of damage to the Hurricanes’ defence. Blasting his way out of the Exiles 22 with a leg drive that might have propelled a steam locomotive, but just when Exiles looked like they were again going to cause problems, they again knocked the ball on.

When the ‘Canes second score arrived, it was pulled out of thin air. Well, it was pulled out of the hands of Exiles’ centre Justin Walsh. When Justin looked like he was going to build up a head of steam, a ‘Canes defender managed to get his arms around the ball and strip it out of the big centre’s grasp, an offload and the ‘Canes were under the Exiles’ posts. 12 – 0 to Hurricanes, 9 minutes played.

Nobody was quite sure what was going on. Hurricanes had created nothing but were 12 points to the good and the Exiles’ couldn’t hang on to the ball. Marc Why, the Exiles’ Facebook feed commentator was doing well not to fill the feed with expletives as over 1000 people watched the game online. Even Exiles’ Director of Rugby, Jacques Benade, famed for his patience, was beginning to get agitated.

Epeli Davetawalu powers into the Hurricanes’ 22

Exiles finally go on the attack

The first aid kit was duly delivered by Carel Thomas. He was incredibly lucky that he didn’t need it himself after an oddly football orientated attempted tackle from the Hurricanes’ 20. The tackle attempt took the sort of appearance that Manchester United and Ireland star Roy Keane would have been proud to go at Patrick Vieira with. The Exiles’ Namibian scrum-half did manage to get over the try line with his legs in-tact despite the despairingly inappropriate tackle attempt from the ‘Canes 20. 12 – 5.

Carel’s score seemed to settle things down for the Exiles. With the first period of play coming to a close the Exiles looked like they’d suddenly realised that they were in a rugby match. A huge tackle from Exiles’ hooker Dave Gairn had levelled the Hurricanes’ scrum-half. The ball had been thrown wildly backwards and Exiles’ 8, Jaen Botes, joined in with the thumping tackles to force a knock-on and give Exiles’ possession.

It was all UAE Premiership Champions now, they were grinding their way into the heart of the Hurricanes’ defence with a steely determination. Exiles moved the ball out to the left and into the Hurricanes 22. Fijian Epeli Davetawalu took out 3 defenders and a huge pass from Carel Thomas allowed DuRandt Gerber to put Sebastien Sabania into space. The teenager still had a lot to do, but he showed a maturity beyond his years and finished the score in style. Converted by Gerber. 12 – 12. End of the first period.

From the start of the second period, it was a whole new Exiles. Maybe an Exiles of old? Whichever way you chose to look at it, the team that had delivered the first 10 minutes of the match had departed the field. From the kick-off the Exiles were immediately on the attack. Excellent running lines, passes sticking, and as soon as you saw the ‘Canes defender faced with a two on one with Robbie Sproul on one side and Schalk Du Preez on the other, there was only one inevitable outcome. Try by Schalk Du Preez. 12 – 17 to Exiles.

The Hurricanes were visibly deflated. Heads and shoulders that had stood proud in the first period of play looked drooped and disinterested. Line outs, rucks and restarts, the energy had left them, restarts were being meandered to.

The Exiles’ fourth try after the Hurricanes decided to adopt a kicking strategy. Three times they kicked away possession rather than to try and hold the ball and make inroads into the Exiles’ defence. The defence was pretty potent at this point, but it would have been more sensible than to kick to an Exiles’ back three that are packed with pace.

When the Exiles’ fourth try came it was a corker from Jarrod Eglen. The unassuming Australian youngster had gathered the ball after an Exiles lineout in the Hurricanes 22. The ball had been flashed back to the touchline, Epeli Davetawalu again drew the attention of too many defenders and Jarrod was left with an, almost, clear run to the line. A spectacular diving finish and the ball was grounded. 12 – 22 to Dubai Exiles RFC.

It was all Dubai Exiles now. Only an opportunist try from Fijian international, Saki Naisau, after the Exiles had spilled a ball gave Hurricanes hope on the scoreboard, the Fijian had displayed his great footwork to get over the try line and under the posts. 19 – 22 to Exiles. End of second period.

The scoreboard was telling the story of a close fought match, but the reality on the pitch was clear, there was now only going to be one winner. Hurricanes were still kicking possession away when they should have been holding onto it and playing some rugby. The Exiles back 3 were having a great time creating and finding space for each other.

A minute later and Robbie Sproul got the try that he deserved. A couple of odd, knuckle ball, passes by the Exiles in their own 22 had stopped the Hurricanes drifting defence. When the ball was collected by Schalk Du Preez, he hit his accelerator pedal and as the scrambling Hurricanes’ defence began to look like it might make an impact, a well directed grubber was put through for Robbie to gather and score under the posts. 19 – 34. His delight was obvious to everyone.

See Sabania eyes up his options

The seventh Exiles try was almost immediate. The restart had been left to bounce over the touchline by the Exiles, which looked like an odd decision at the time. The resulting lineout was in the Exiles’ 22. Justin Walsh did the damage. Once the lineout was completed Walshy went on a rampaging run. The Hurricanes did well to haul him down, but from the ensuing ruck, big Jaen Botes thumped the ball up field for DuRandt Gerber to release Schalk Du Preez to cause all sorts of havoc for the Hurricanes, it was only a despairing tap tackle that halted the wingers’ progress.

When the ball was moved out from the ruck, dynamic Nick Crampton attracted the attention of the last Hurricanes’ defender and allowed another teenager, Marcus Kruger, to cross for the final score of the match. 19 – 39 to Dubai Exiles RFC.

Dave Gairn and Jaen Botes are happy with the win!