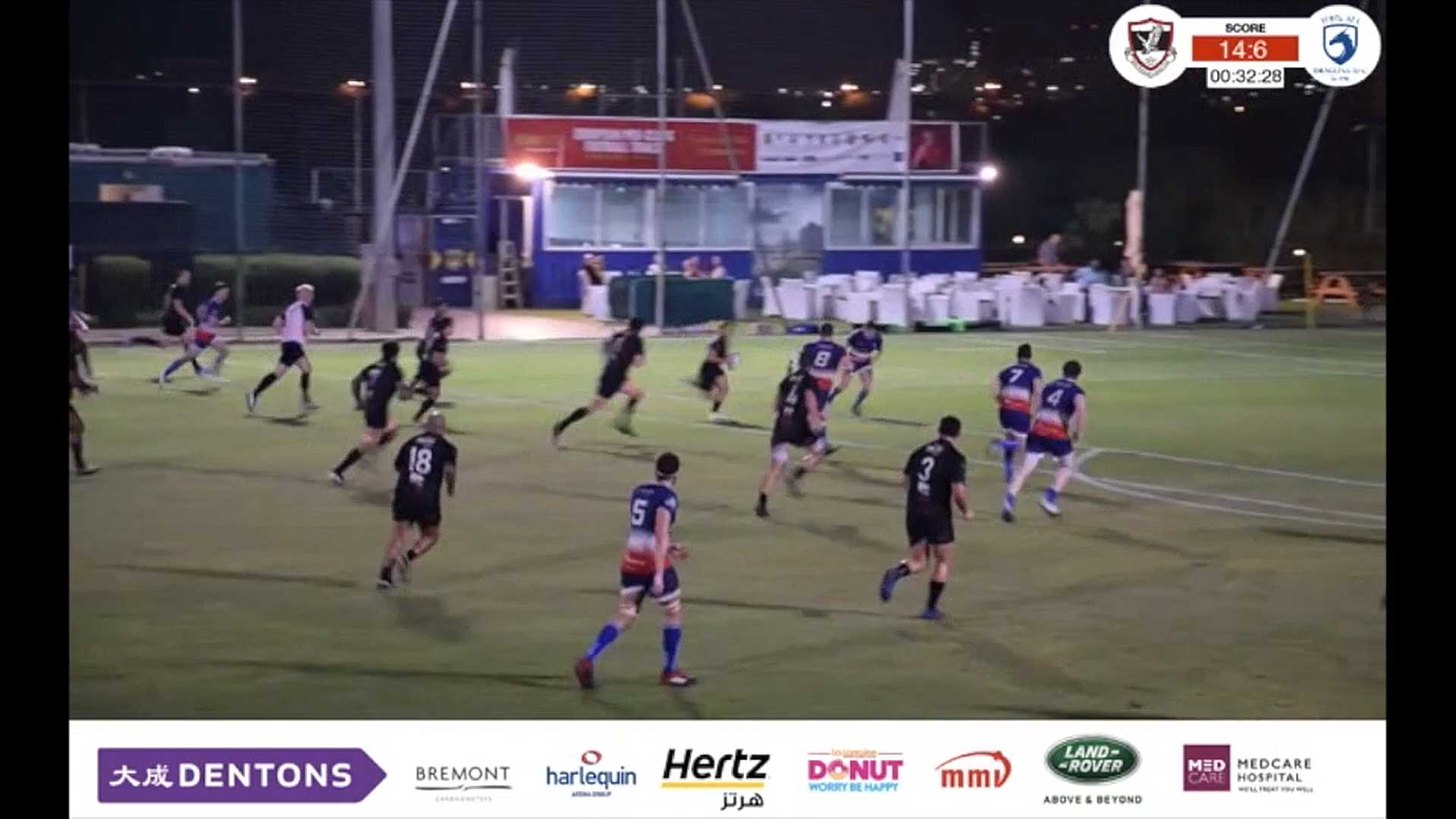 The Exiles signalled their intent early, from the kick-off, the ball was being fizzed around the ‘Jebel Ali Centre of Excellence’ by the visiting side. Looking to catch the Dragons off guard from the outset, some superb handling and direct running from the Exiles pack quickly earned the visitors a penalty. Outside Half DuRandt Gerber kicked an excellent touch finder taking the Exiles to the Dragons’ 22.

A clean take from South African Number 8, Jaen Botes, and the Exiles were soon gaining easy metres through a ferocious maul which the Dragons eventually managed to bring to heel. The ball was popped to UAE International centre, Kinivialiame Natuna, and the big Fijian was soon creating even more problems for the Dragons defence. Some quick pick and drives from the pack almost saw former Dragons player, and Exiles hooker, Gio Fourie get over the line. Stopped just short and with the Dragons defence so narrow you could throw a tea towel over them, Namibian scrum half Carel Thomas fed the back line, with the Dragons centres caught in no-man’s land, Kiwi centre Paul Tupai threw a long, looping pass, out to grateful recipient Danny Waddy, who ran in unopposed for the opening try. Converted by Gerber. Three minutes into the game and 0 – 7 to the Exiles.

The only issue with scoring so early in a match, is that the scoring side can often get the idea into their heads that the rest of the match is going to be easy. The Exiles appeared to be guilty of this – for the next 20 minutes the Exiles seemed to treat the match as is it was a training session, throwing wide passes in their own 22 and lacking energy in defence. They gifted the Jebel Ali Dragons a couple of soft penalties and despite the hosts not creating a single attacking opportunity, they were back in the game at 6 – 7.

The game sprang back into life after 22 minutes. The Dragons turned down an easy penalty shot at goal when their scrum half tapped and took off into the exiles 22. A loose pass in the Dragons backline saw the ball knocked on and from the ensuing scrum in the Exiles 22, the Exiles again went hunting for the try of the season. Carel Thomas picked up the ball and set off, passing to Paul Tupai who then fed on to Michael Stubbs and the Exiles were already up to half-way. After some excellent breakdown work from Danny Waddy, huge Exiles wing, Justin Walsh, picked the ball up from the back of the ruck, fended the Dragons’ Fijian winger and with excellent pace made over 40 metres before being hauled down just short of the try line. A pick and go from DuRandt Gerber, but he was also stopped just short of the line. Some pick and goes again and the referee blew up for being held up over the line. From the scrum, with all of the Exiles stacked to the open side, the Exiles scrum-half picked up the ball and fed big Justin Walsh to crash over the line for a score that the winger richly deserved. Converted by Gerber. 6 – 14 to the Exiles.

At this point, a routine established itself, the Exiles would do all of the ball in hand play, attacking the Dragons defence and the Dragons would kick the ball back to the Exiles at every opportunity, almost metronomic. Were it not for a couple of high tackles on fleet of foot winger Michael Stubbs, the Exiles could have been another couple of scores to the good over their hosts.

Just to mix things up a little, the Dragons introduced a new tactic of giving penalties away as well as kicking the ball away. From one of these penalties, after a decent touch finder from Gerber, the Exiles moved the ball along the back line and again caught the Dragons centres in no-man’s land, the floated pass reaching Justin Walsh for an easy run in. 6 – 22 to Exiles.

The big winger was having a great game, again the Dragons kicked possession away and a sweeping attack deposited the ball in Walsh’s hands who sped off. Deciding there was no more room on his bus, Walsh fended off 3 Dragons would-be tacklers with great aplomb, much to the amusement of the visiting Exiles supporters. Some great hands again and the visitors were up to the Dragons 10 metre line before the ball was eventually knocked on.

With 20 minutes left, the Dragons again decided they didn’t want to have the ball and kicked it away. Exiles again went on the attack and from their own 22 the found themselves with a line out on the Dragons 5 metre line. Some nice hands through the backline again, and with runners offering themselves from all angles, the ball was moved out wide. A wonderful slight of hand final pass from Paul Tupai put newcomer to the game, Gregor Haldane over the line for another Exiles 5 pointer and bonus point try. 6 – 27 Exiles.

With the clock ticking away, and 10 minutes left in the game, the Dragons’ Fijian winger showed some excellent footwork to get over the Exiles try line for a consolation score. The try had come from a fumbled ball in an Exiles attack leaving the dancing Fijian with a relatively easy route to the try line. Converted by Dragons. 13 – 27.

Exiles were to have the last word though. Replacement centre James Crossley was running hard and direct at the Dragons faltering defence. Play progressed into the Dragons 22 and UAE International, Matt Mills, sponsored this season by the Dubai Exiles U16 side, picked a wonderful line to go over unopposed. Gerber kicked the conversion in what was to prove to be the last score of the match. Exiles winning out with a 13 – 34 point win and an all-important bonus point victory that sends them to the top of the Premiership tables.