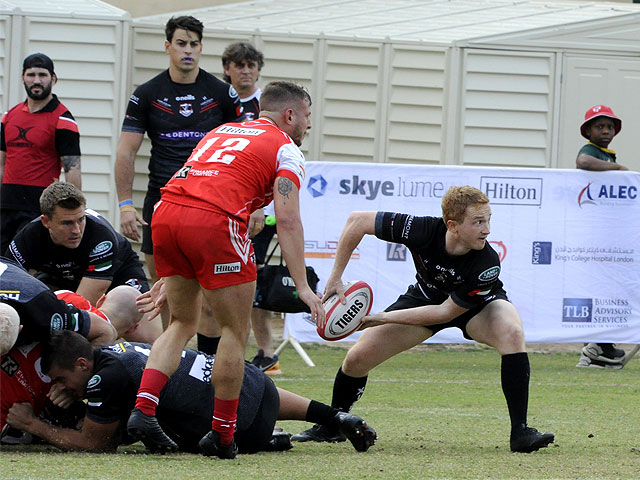 There is no finer sight to greet a visiting rugby side than to walk out onto another team’s pitch and see that your supporters are outnumbering those of the home side. It was wonderful to see so many Exiles mini and youth players, both girls and boys, who had come to lend their support to the undefeated senior Premiership side.

A trip into the unknown for the Exiles against the UAE Premiership new boys, the Dubai Tigers. Promoted to Gulf rugby’s top-flight after finishing top of Division 1 for the last 2 years. The Tigers have already raised a few eyebrows this season with a couple of good wins against Jebel Ali Dragons and Dubai Knights Eagles and also a narrow two point loss to last season’s UAE Premiership winners, the Abu Dhabi Harlequins.

Early exchanges were swift and brutal, the Tigers’ enormous and hard-hitting pack doing their utmost to snuff out Exiles attacks. However, the nice thing about playing against big men is that they can be slow to roll, move and generally get to their feet. The Tigers’ lackadaisical approach to getting out of the way soon leaked 2 penalties that were converted by Exiles number 10, DuRandt Gerber. 0 – 6 to Exiles.

The Exiles were playing all of the attacking rugby, moving the ball from one side of the park to another with heavy runners such as Matt Mills, Jaen Botes and James Crossley causing enormous problems for the Tigers defence.

The first try of the match came after 12 minutes. Exiles were patient and direct after an attack from their own half set wing Michael Stubbs away into space on the left of the field. From Stubbsy’s run, the Exiles found themselves just outside the Tigers’ 22, the ball was quickly moved from the breakdown into the middle of the field, patient work from the pack sucked in the defence and just a few phases later centre, James Crossley, picked a short line and crashed over near the posts. Converted by Gerber. 0 – 13 to Exiles.

13 minutes played and 13 points up, you wouldn’t be blamed for thinking that this might be a long day at the office for the Premiership new boys. From the restart, the Tigers decided to play a bit of running rugby, and after some good work down the right hand touchline, a fortuitous Barnes Wallis of a pass stopped the Exiles defence in its tracks as the ball bounced into the hands of the Tigers centre who found himself with a free run to the try line. Unconverted, 5 – 13 to Exiles.

It didn’t take long for the Exiles to reply, the Tigers 9 fumbled the ball and it was gratefully picked up by centre, James Crossley, who was having a strong and hard running game. Once finally tackled, he popped the ball off the floor to Irish second row Jerry Arthurs who breached the 22 before being hauled down. Some quick hands, and Crossley, back on his feet and back in the game shipped the ball to fullback, Conor Kennedy who in turn put wing, Namibian Carel Thomas, into the corner for the score. Carel had just come on to the field for Justin Walsh (knee injury). Unconverted, 5 – 18 to Exiles.

From the ensuing kick off the Tigers earned a penalty due to some lazy, and high, tackling. 8 – 18 to the Exiles.

The Tigers were not threatening the Exiles try line at all. In fact, had it not been for the re-enactment of the Dambusters attack on the Ruhr Valley, the Exiles try line was never close to being breached. Again, a Tigers fumble in midfield saw Conor Kennedy let loose Michael Stubbs, who again caused mayhem in the home side’s defence. The Tigers lineout went awry and young South African prop, Christiaan De Jager gathered the ball and crashed over the line. 8 – 23 to Exiles.

The final try of the half was a much more traditional affair, the Exiles again playing all of the rugby, but remaining patient. After several phases of play in the Tigers’ red zone, Jaen botes thumped his way over from just half a metre out. Converted by Gerber, 8 – 30 to the Exiles.

Second half scoring was opened by the Tigers, a soft penalty which was to prove to be the final score of the game for the home rugby team.

It was all Exiles from this point on, but the Tigers defence proved to be dogged and determined. Gains were having to be battled and scrapped for in every area of the pitch until finally the Exiles’ ascendancy paid off and they swept towards their opponent’s try line only to be denied by what looked to be a suspicious single-handed knock down by a Tigers defender. The referee allowed play to continue and flashing back across the field, a gap opened up for fullback Conor Kennedy to coast over the line. Converted by Gerber. 8 – 37 to Exiles.

Exiles rang a few changes in personnel, U19 wing Viaan De Beer entered proceedings and immediately caused havoc in the Tigers defence when some great footwork and an offload that found the Exiles fullback who quickly popped the ball to another U19 player, Hanco Von Abo, who galloped off towards the Tigers try line. The young second row was eventually hauled down by three Tigers defenders, but he still managed to make the ball available and when it looked likely that the Exiles were going to score again, a wayward pass found the ball in the hands of a grateful Tigers defender.

With the Tigers unable to escape from their own half, the Exiles made good metres from a hugely powerful scrum that gained Exiles a penalty advantage, and with the free play, the Exiles fullback chipped over the onrushing defence, almost gathered the ball but for a lucky Tigers favourable bounce in the in-goal area.

Exiles saved their best until last, controlled and aggressive phase play from a lineout gathered by number 6 Danny Waddy, saw a short pass to Matt Mills who went hunting for space. When the Tigers managed to just about close the door, a short pass to Kiwi, Paul Tupai, dragged the Tigers defence far too narrow and they were starting to look exposed. Conor Kennedy made the first incision with a lovely step inside his defender, some hard running pick and goes from the members of the front row union, a surge from Danny Waddy and Pieter Killian picked up to crash over the line. Converted by Gerber.