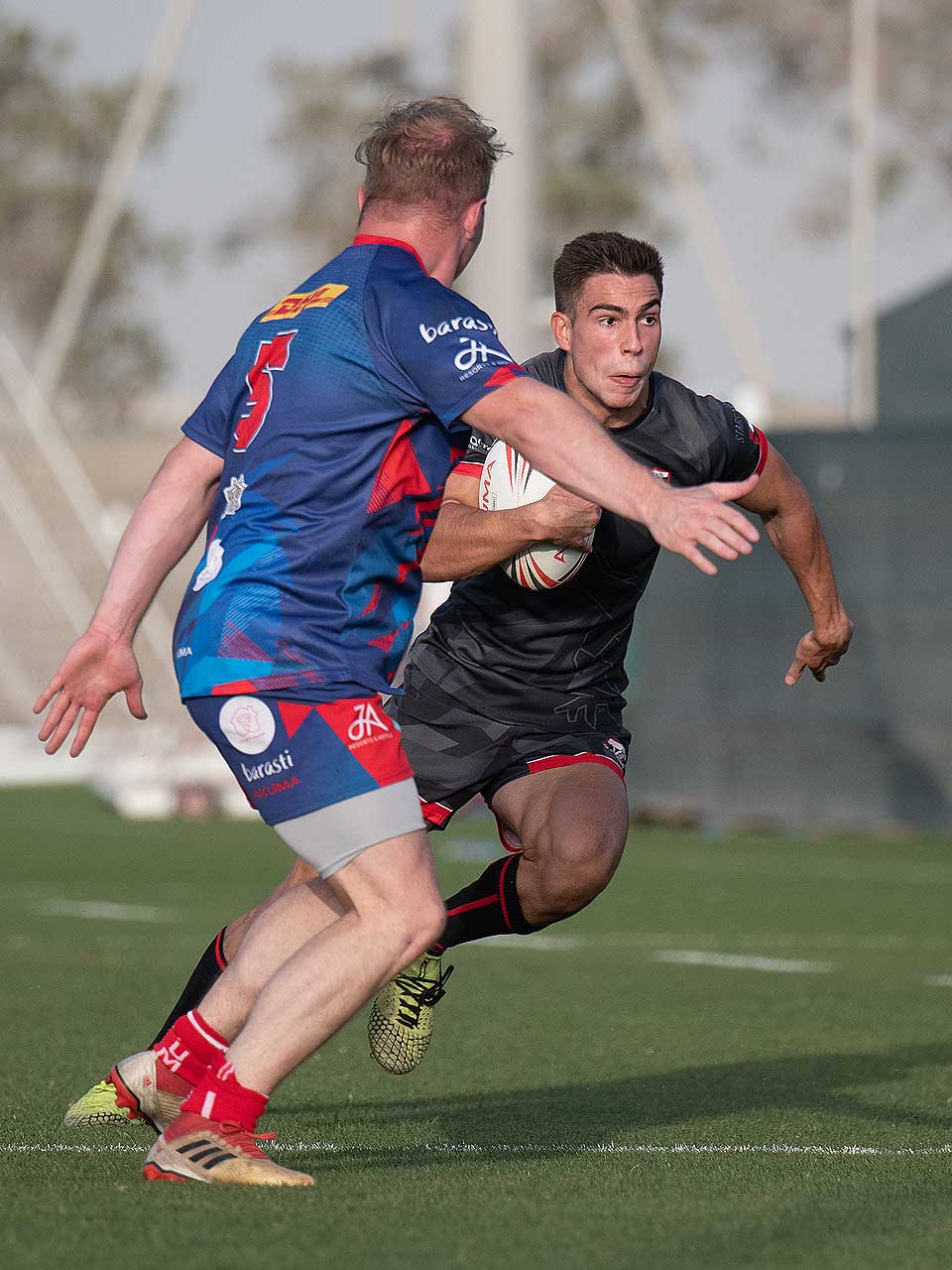 With the Exiles 2s having done a demolition job on the Jebel Ali Dragons in their Northern Emirates Division 1 match-up, a 24 – 71 win over their hosts. It was left up the the Exiles‘ Premiership side to see how they would fare against a Jebel Ali Dragons side, that until today, had posted some pretty decent results.

Epeli Davetawalu is good to go

The Jebel Ali Dragons had been showing pretty good form in the Covid inspired 10 man Northern Emirates Premiership. Good wins over the Dubai Knights-Eagles (5 – 82) and against the Dubai Tigers (64 – 20) wetted the pallet for what looked like a possible ‘try fest shoot out’ at Jebel Ali.

There were plenty of serious faces on pitch as Exiles‘ stalwart, and Exiles under 16s coach, DuRandt Gerber got things under way. From the opening kick off, teenager Nick Crampton signalled the Exiles‘ intent by absolutely poleaxing the Dragons receiver, much to the delight of the Exiles‘ substitutes bench.

The early exchanges were tense, It was evident that the Dubai Exiles hadn’t played for three weeks, despite keeping the Jebel Ali Dragons pinned in their own 22, some passes were unnecessarily going astray, even the ones from the more experienced senior players.

Conor Kennedy can sniff out the smallest gap

After the first 2 minutes, the Exiles ring rust looked like it had been shaken off. Jaen Botes‘s big hand off had done the initial damage down the right flank. The ball was swiftly moved in field for Kenyan international, Brad Owako, to straighten the Exiles attack and take two Jebel Ali defenders out of the Dragons‘ defence. The Dubai Exiles minis would have been very proud of the efforts of their coach!

Too many Dragons hands in the ensuing ruck, a penalty, and the Exiles were again on the attack. A step from DuRandt Gerber, quick hands from Brad Owako and Fijian, Epeli Davetawalu. was over for the first of three first period tries for Dubai Exiles RFC.

The second period didn’t get off to the best start. A litany of bad passes and knock-ons initially blocked any access to some free flowing rugby. Justin Walsh announced himself into proceedings by running straight over a Dragons defender in much the same way that a freight train runs over your grandfathers’ matchstick model of Dutch windmill.

It wasn’t until half way through the second period that the deadlock was broken. With the Dragons on a rare attack, a huge hit from Epeli Davetawalu sent a Dragons player, and the ball backwards. The ball benevolently  bounced into the hands of Exiles scrum half, Carel Thomas, who outpaced the scrambling Dragons defence and scored under the posts. 0 – 26 to Exiles.

Schalk Du Preez was the next to score. Epeli Davetawalu again caused all sorts of problem for the Jebel Ali Dragons defence, by crashing through multiple tackles and as the ball was flashed back Schalk found himself one on one with a Dragons forward, there was only one outcome in that particular footrace. 0 – 33 to Exiles.

The Jebel Ali Dragons were trying to make a fist of things, but too many isolated ball carriers in promising positions were playing into the hands of a rampant and destructive Exiles defence. Too destructive at one point, Epeli Davetawalu receiving a yellow card after flattening Dragons‘ captain, Matt Richards, thankfully Matt was okay and he got back to his feet. 0 – 33 to Exiles at the interval.

Alex Fowler managed to hang on

The Exiles were already 5 tries to the good when Nick Crampton scored under the posts at the very beginning of the final period. That was pretty well it for the Jebel Ali Dragons. Nick deserved his score. The big teenager had been an absolute nuisance for the Jebel Ali defence all game with his abrasive and direct running. 0 – 40 to Exiles.

With the light starting to fade over the Port of Jebel Ali, Schalk Du Preez grabbed his third try of the match. Two passes away from a Dragons turnover and the speedster was away, the Dragons defence didn’t even bother to chase. 0 – 47 to Exiles.

The final word went to Conor Kennedy. Robbie Sproul kicked ahead from a penalty and after eclipsing the Dragons defence he regathered his kick and passed inside to Conor who collected the ball, produced an outrageous sidestep, and scored under the posts. 0 – 54 to Exiles. Final score.

The end to a good day for Dubai Exiles RFC