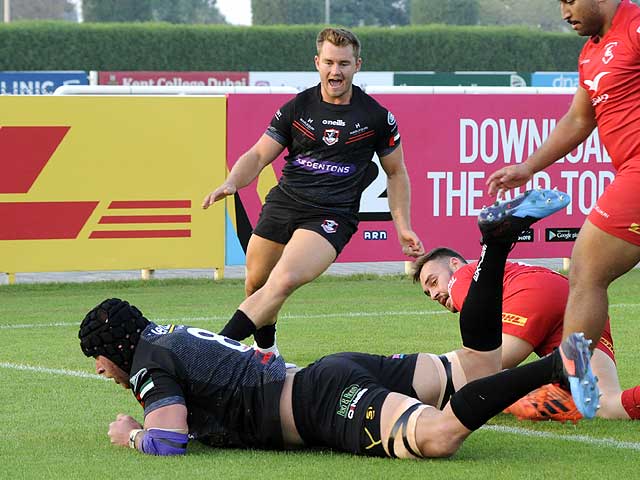 It was a full house at the Exiles for the visit of reigning West Asia champions Bahrain who were in town for an eagerly awaited clash with Dubai’s premier rugby side, the Dubai Exiles, at the World Famous Sevens Stadium. A big crowd had gathered to enjoy the outdoor furniture, hospitality and high quality rugby on display from the Exiles Clubhouse.

Bahrain have been the powerhouse of West Asia rugby in recent seasons and it seems that has been only the Exiles that are able to give them any sort of competition, Bahrain’s only defeat last season coming in the same fixture, a defeat to Exiles at the Sevens Stadium.

From the kick off, it was clear that this was not going to be a free running expansive game of rugby, both sides fronting up with well organised and powerful defences.

The early exchanges were tense and physical, both teams probing for any signs of weakness, the first break through came on after 18 minutes, Bahrain caught offside at their own lineout and DuRandt Gerber delivered a nice up to Bahrain’s 22. Exiles’ Big Fijian centre, Kiniviliame Natune provided the initial surge into the heart of the Bahrain defence, a feed on to UAE International Matt Mills and the Exiles had discovered some go-forward, further pick and goes and some dancing footwork from scrum half Carel Thomas and Exiles were closing in on the Bahrain 5 metre line. The ball found its way into the hands of Northern Irishman Stephen Ferguson who was dragged down a handful of metres short of the line. Bahrain were back peddling at a rate of knots now and another quick pop pass to Jaen Botes sent the big South African Number 8 crashing over the Bahrain try line for the first try of the game. Converted by Gerber. 7 – 0 Exiles.

The score sparked Exiles into life, a great take from the kick off by young Australian back row forward Jarrod Eglen and Exiles were on the attack again. Some slick handling skills across the back line put wing, Michael Stubbs, into some space and the wing gained some excellent metres, taking play to the half-way line. The attack fizzled out when outside half, Gerber, looking to turn the Bahrain defence slightly overcooked his kick, putting the ball out on the full.

Exiles compounded the problem by giving a soft penalty away, an excellent touch finder from the Bahrain outside half sent them all the way to the 5 metre line. A full lineout, well organized maul and Bahrain were crashing over for 5 points of their own. Converted by Bahrain, 7 – 7.

As was typical of last seasons clashes between the two sides, no quarter was being given by either side. The game was ebbing and flowing, first one way and then the other. Looking to play some rugby, Exiles hit the ball up the middle of Bahrain again, Bahrain ripped the ball out for a turnover, but fortuitously for the Exiles, Bahrain failed to gather the ball leaving it to be hacked through by Michael Stubbs and with some excellent soccer skills, the South African winger won the foot race to put Exiles 12 – 7 up. Converted by Gerber, 14 – 7.

The second half remained as much of an arm wrestle as the first. Again, neither side were willing to give an inch and over 20 minutes passed before the first score of the half made an appearance. A penalty to Bahrain which took the score to 14 – 10 to Exiles. Less than a score in front of Bahrain is always a nervous place to be.

The clock ticked down to 10 minutes to go, Bahrain looked to be in the ascendancy and were driving into the Exiles 22 in front of the posts. A shrill blast of the whistle from the referee signaled a penalty to Bahrain, 15 metres out in front of the uprights and it looked all set to be 14 – 13. Captain, DuRandt Gerber, asked for some clarity on the penalty decision and everybody thought that was that, but the Assistant Referee intervened and after a lengthy discussion between the official the penalty was reversed – a let off for the Exiles.

With the clock ticking into the final 5 minutes of the match, the highlight of the game was about to unfold. A Bahrain overthrow at a lineout was gathered by Namibian scrum half Carel Thomas who lofted the ball over the top of a despairing Bahrain defence to New Zealander Paul Tupai who in turn set South African second row Johannes Von Abo into some space, eventually being driven into touch in the Bahrain 22.

Bahrain took a clean lineout and looked to clear their lines, the clearing kick missed touch and found its way into the arms of earlier try scorer Stubbs. Spotting some space, the South African took off into the middle of the field, a wonderful sidestep to beat the first defender and he was away, a quick show and go to beat another would be tackler and ‘Stubbsy’ was into the Bahrain 22, attracting defenders and looking for support. That support was eagerly provided by Zimbabwean full back, and UAE Sevens International Connor Kennedy who picked a beautiful line, and with the Bahrain defence heading in the wrong direction stepped inside and under the posts for the try to secure the victory for Exiles. Converted by Gerber 21 – 10 Exiles.

Never a side to give up, and with time expired, Bahrain battled through the last seconds of the game to score a well worked consolation try which was converted, giving Bahrain a deserved losing bonus point, and one that might prove to be crucial at the end of the season.