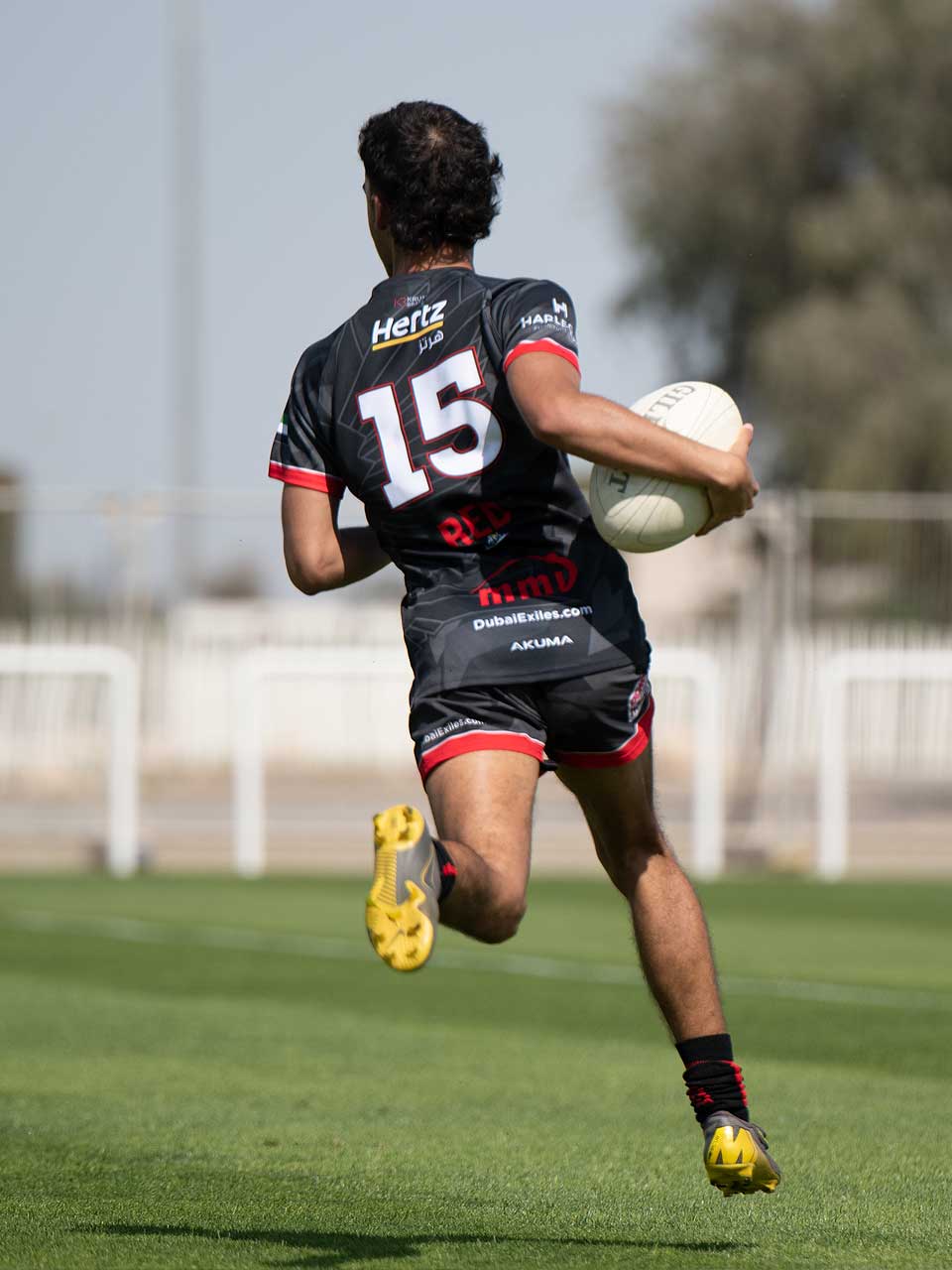 Round 2 of the Northern Emirates Division 1 got underway this weekend. Both the Dubai Exiles and Dubai Hurricanes Division 1 sides had emphatic wins the previous weekend, the Exiles dispatching the Tigers 38 – 66 down in Dubai College and the Hurricanes making short work of the Knights-Eagles by 73 points to 12.

Sebastian Sebania takes a jog past the scoreboard

Things got underway at The Sevens in the morning, a 10am kick off on Pitch 1, sadly without 44,000 partying rugby fans. Not only the majority of the stadium was missing, but also the fervent Exiles and Hurricanes fans. This match had to be contested behind closed doors.

The game kicked off in the morning sunshine, the heat of the morning increased along with the heat of the game. In the early exchanges both sides probed each others defense, after 3 minutes of play first blood was drawn by the Dubai Hurricanes. After jumping on a loose Exiles’ lineout, the ‘Canes swept down the right side of the field, a quick ruck, a missed tackle, and Dubai Hurricanes were 0 – 5 up.

Some great rugby was consistently being played by both sides, but a lack of application of the 10-man-rugby ruck rules far too often snuffed out enterprising attacks.

The first 15 minute period closed with both sides in an arm wrestle at 5 points each. It was a far more cagey affair then the previous week’s blowouts. The tension was palpable, the smiles of the previous games had given way to serious expressions and intense concentration.

Thinus Steyn scores for The Exiles

The second of the three periods began with the Dubai Hurricanes kicking the ball out on the full, gifting the Exiles a free kick in the middle of the field. Aidan Seyfferdt sent Pieter Killian on his way who set winger Zander Visser off to the races. When the tackle did come from the Hurricanes, the ball found itself in the hands of Pieter Killian again and the Premiership winning prop lofted the ball over the onrushing Hurricanes defense to Phillip Le Roux. The move was snuffed out by referee James Fairbourn who pulled play back for an earlier infringement. The penalty allowed Pieter Killian, again, to carry hard and quick of thought and or feet, Jamie Annand, danced and stretched over for the Exiles’ second try. 10 – 5 to Exiles.

Cornelius Spies wrong foots a would be Hurricanes defender

The Exile’s third try over their Sevens Stadium neighbours came almost immediately. Thinus Steyn collected the Hurricanes Rugby Club kick off and immediately broke through some weak Hurricanes defense. In acres of space and with one Hurricane to beat, the defender was fixed and a simple pass gave Jaron Shelley an uncontested run in to score under the posts. Converted. 17 – 5 to Exiles.

At this juncture it was all Exiles. The oldest rugby club in the Middle East looked like they were going to score in the left corner, an overrunning potential receiver and the chance was lost, still 17 – 5 to Exiles. Despite the Exiles’ obvious ascendancy in the second period, it was Dubai Hurricanes that scored next.

The Hurricanes wing looked like he had a free sprint to the try line but Exiles’ Sebastian Sebania didn’t give up on the chase and ran down the would by Hurricanes try scorer. A couple of phases later, and some great footwork from the ‘Canes number 9, and the visitors were under the posts for the try. Converted. 17 – 12 to Exiles and the end of the second period of play.

Will Bacon wins another lineout contest

From the restart, Exiles used Thusitha Samarathilaka to great effect. Oblivious to the fact that they had a blindside to defend. Hurricanes flooded the open side allowing teenager Gabriel Casas the simplest of runs to the try line. 22 – 12 to Exiles.

When Jamie Annand hit a Howitzer of a clearance, Dubai Hurricanes had a lineout on their own 10m line. The throw in curved like a banana to match the Hurricanes playing strip and a free kick was duly awarded to the home team. Thusitha Samarathilaka again did all the damage, a quick recycle and Aidan Seyfferdt found himself with a two on one against a Hurricanes defender. When the defender elected to stay out on his wing, a show and go from Aidan gave him an unhindered run to the try line 27 – 12 to Exiles.

For all intents and purposes the match was won. But the Hurricanes didn’t share this prognosis. Two tries in the next 4 minutes put the game in the balance. Exiles 27 – Hurricanes 22.

The final few minutes proved to be a nervy affair, both sides concerned about making the one mistake that would put the final nail in the match coffin. Heading into the final minute the Hurricanes substituted half of their team. 6 off and 6 on. It was their final throw of the dice. The fresh legs failed to make the impact needed. A spilled ball saw Pieter Killian kick the ball almost 60 metres to relieve the pressure, a Hurricanes knock on ensued and in desperation to retrieve the ball, a Hurricanes player received a yellow card and was sent to the naughty chair. The card clock didn’t matter, the Exiles’ penalty was the kick of the match and the young Exiles Division 1 side left the field with the spoils of victory.