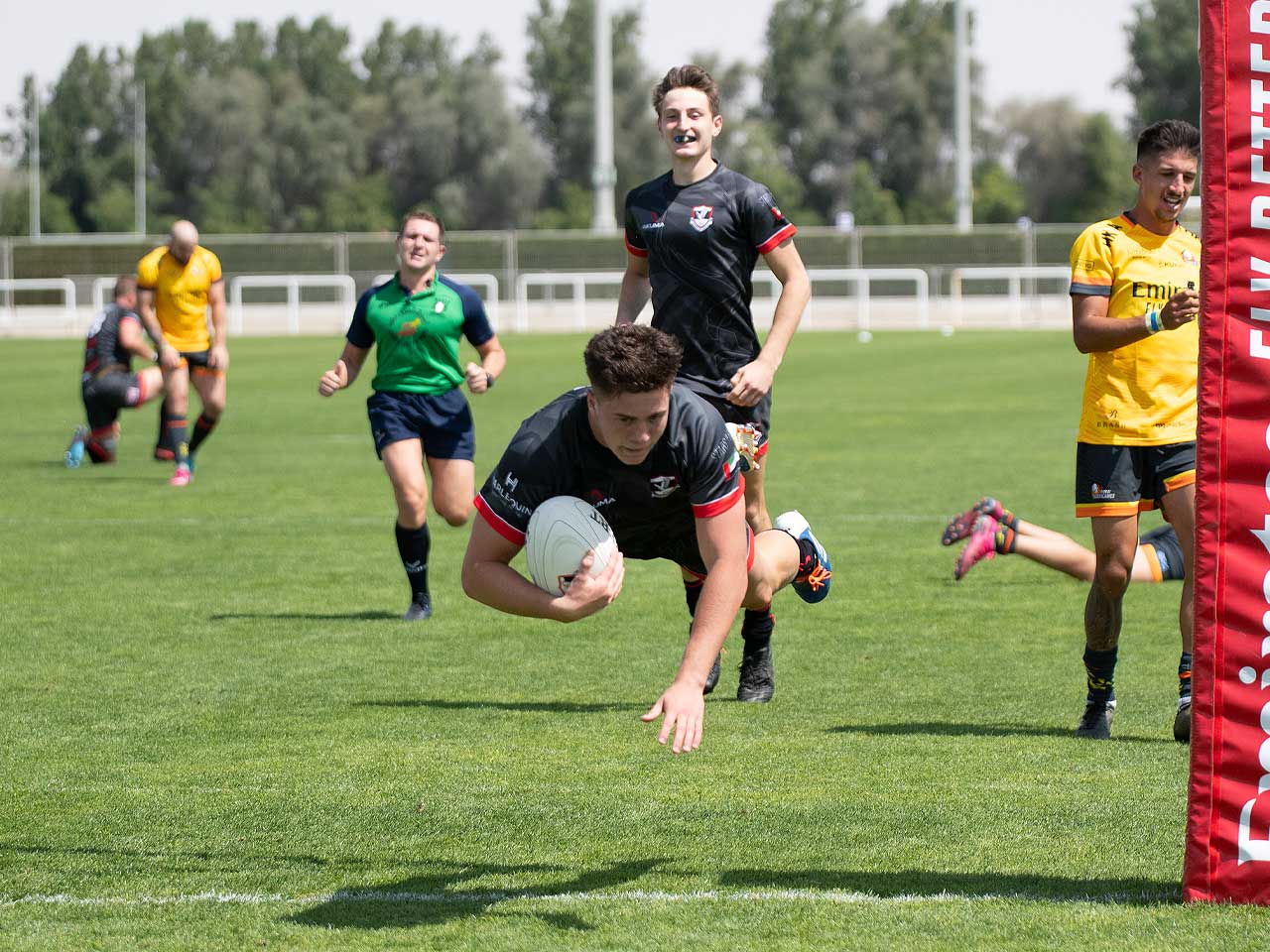 There are many unanswered sports mysteries. What happened to one of the great thoroughbred racehorses, Shergar? How did Marvelous Marvin Hagler lose to Sugar Ray Leonard in the 1987 ‘Super Fight’, a fighter in his prime against Leonard who’d retired in 1982 and only had one fight in 5 years? What really happened in the camp after Wales won the 2005 Grand Slam, their first Grand Slam since 1978, that caused Mike Ruddock to resign?

One of the other great unanswered questions in sport would be resolved this weekend (yes, it’s tenuous). When the reigning UAE Premiership Champions in the traditional 15-a-side game, Dubai Exiles RFC, play the 7-a-side Emirates Dubai Sevens (Gulf) winners, Dubai Hurricanes, in a 10-man version of the game – who wins?

Conor Kennedy gets ready to start the match

There was an insistence from various stakeholders that the match be played behind closed doors, it was played on Pitch 1 at The Sevens, a fantastic surface, but alas an empty 1000-seater stand. Pitch 1 is more used to having 44,000 rugby fanatics having a 3-day party at the world-famous Emirates Dubai Sevens, but this week the pitch that hosts the final of the annual showpiece was deserted of spectators.

Premiership Champions the Dubai Exiles kicked off, Conor Kennedy sending the ball wide to the right side of the pitch. The early exchanges were nervy and fraught with tension. Penalties and dropped passes interrupted any possible flow to the game as the two sides looked to shake off their astriction.

After 3 minutes of opening play, Exiles’ big Fijian, Epeli Davetawalu, a UAE International set off on a thumping run from his own 22. With two would-be Hurricanes tacklers left face down on the green the Exiles’ Minis and Under 19 Girls coach had thumped his way to the half-way line. Exiles were starting to flow but inexplicably failing to spot overlaps in the opening exchanges.

Fijian, Epeli Davetawalu, does some damage

The first try did come. From a Dubai Hurricanes RFC lineout, Exiles’ teenager Nicholas Crampton, stole the Hurricanes lineout and set off on a charge into the 22 breaking through weak Hurricanes tackling. Once the youngster’s run had done all of the damage, a fix of the final Hurricanes defender and a soft pass to supporting Jarrod Eglen gave the Australian a stroll in for the Exiles first try. 5 – 0.

Like a London bus, when waiting for the first try of the match, 2 came along at once. Hurricanes RFC gathered their own restart and worked to the Exiles’ try line. Some great Exiles defense snuffed out a Hurricanes impotent attack. The ball found its way into the hands of Exiles’ Hooker, Under 12 and 15 Girls rugby coach, David Gairn who was on the receiving end of a crunching tackle from a Hurricanes defender. Caught up in the celebration of the tackle, the Hurricanes back line inexplicably forgot they were in a rugby match and by the time they’d switched back onto the game it was too late. Exiles has sent the ball wide to gratefully take advantage of a gifted 4 on 2. Speedster, Robert Sproul hared off down the wing with the support of another Exiles’ youngster, Hannes Kruger. With the Hurricanes’ final defender desperate to stop the flow he was left in no-mans-land as a perfectly weighted pass to Kruger gave him a clear run to add to the Exiles’ total. 12 – 0.

As the first of three periods came to a conclusion, and amid shouts of ”Heads up” from the Hurricanes’ bench, the Exiles worked the ball wide to the right again. Exiles were making huge yards out wide, unfortunately for the men in black the final pass, on this occasion, didn’t stick and 5 points were missed.

Dubai Hurricanes were desperately trying to escape their own 22 but to no avail. A soft penalty gave the ball back to Exiles, UAE International, Matthew Mills worked a perfect loop with Exiles’ 10 and Under 16 coach, DuRandt Gerber who floated a perfectly weighted pass to onrushing wing Schalk Du Preez who showed the Hurricanes defense a clean pair of heels as he scored in the corner. 17 – 0. End of the first period.

The danger when handing out any type of drubbing to your opposition is complacency. It was coming too easy to the UAE Premiership Champions it was almost a training session, but momentum is a funny thing in rugby, and if you lose it, it doesn’t always come back.

The second period started with a bang for Dubai Hurricanes. A knock on after a failure to gather the kick-off and Hurricanes were on the attack. As everybody knows, you don’t follow an error with another, a couple of rucks, a missed tackle and Dubai Hurricanes RFC were across the line for their first score. 17 – 7.

A couple of minutes later and Hurricanes were across the line again. From a lineout on their own 10m line, the Exiles were guilty of going to sleep in the midfield and allowing the ‘Canes attack a free run down the middle of the park. 17 – 12.

It was difficult to work out if the Dubai Exiles had decided to use the second period of play as a rest session. It was a hot day and getting hotter. Most of the intent was coming from the Hurricanes and their subs bench was getting louder and louder. There were no more scores in the second period and the teams turned around for the final 15 minutes. 17 – 12.

The Dubai Hurricanes got out of the blocks the quickest. There was an energy around the pitch, even without the spectators, it was an intense and nervy atmosphere. The Exiles defense was working hard, and after several rucks where the Hurricanes had made zero meters. A chip over the top from Exiles’ playmaker Conor Kennedy cheaply gave away precious possession to the team in banana yellow, they moved it wide and a well-placed grubber was regathered by the busy ‘Canes scrumhalf who stepped the last Exiles defender and levelled the scores much to the delight of the Hurricanes bench. 17 – 17.

The wake-up alarm bells must have rung in the Exiles minds. With 10 minutes of the period left big and purposeful tackles were being made by the home side in black. On their own 5 meter line, Exiles’ hooker David Gairn delivered a brave lineout and fired a ball over the top to Exiles 10, DuRandt Gerber. The ball was spread wide to Schalk Du Preez who linked up with fellow speedster Robert Sproul. Robbie took off on a 40m run and when he was eventually hauled down his offload was deliberately knocked on by the Hurricanes scrumhalf. A yellow card, arguably a penalty try, but Exiles on the attack.

Epeli Davetawalu eyes up another victim

Outside half DuRandt Gerber took a quick tap and crossed the line for what looked like a score, but match referee, Jaco de Wit brought play back and handed possession to the Hurricanes.

It was all Exiles at this point, the intensity had returned, and the ball was being moved around the field with purpose. When the next Exiles’ try came, it was a cracker. A Hurricanes lineout on the Exiles’ 22 was stolen by Matthew Mills, the ball was spread from right to left and then back the other way, stretching the Hurricanes defense. Robert Sproul again popped up in the middle of the field, and the youngster’s electrifying pace caused huge problems as he left 4 would-be Hurricanes tacklers in his wake. When he was finally scragged, he had the presence of mind to move the ball on to birthday boy Jaen Botes who did what he does best, smashed the ball into the heart of the Hurricanes defense.

With the Hurricanes defense scrambling left and right to cover the open space, Robert Sproul picked up from the back of Botes’s ruck and gratefully accelerated through the smallest of gaps, a hand off and Robbie was under the posts for what proved to be the match winning score. 24 – 17.

With only 3 minutes remaining on the clock, the Hurricanes bench was silenced. Hurricanes did manage to get over for the final score of the match. Out wide on their left, to the relief of the home team, the conversion attempt was nowhere near its target and the final outcome a win for the UAE Premiership Champions over the Emirates Sevens (Gulf) winners, along with the bragging rights. 24 – 22.

Thank you to the Exiles ball-boys for doing such a great job over the 2 games!