Exiles cage Tigers with another 76 points 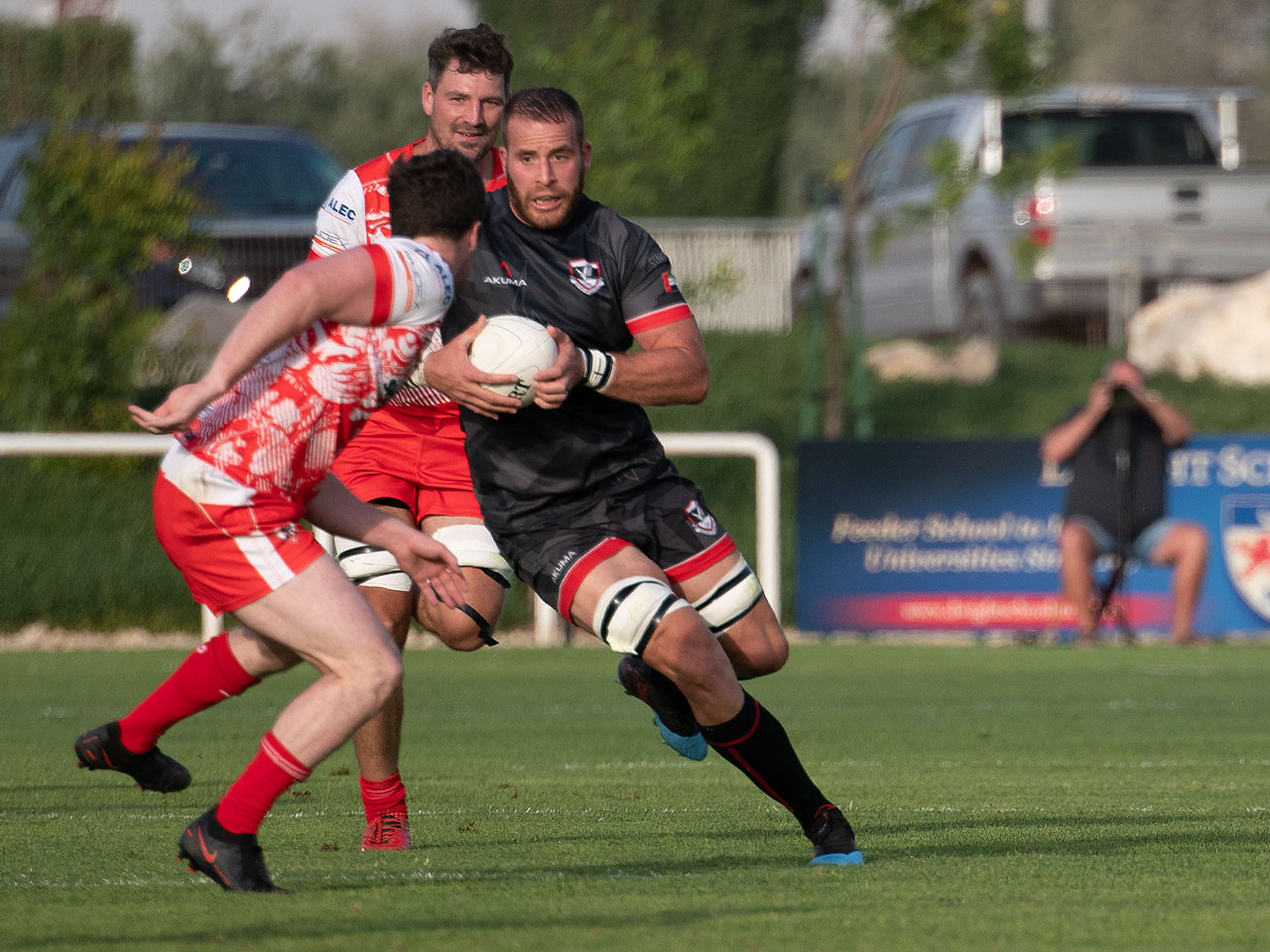 It was almost a ‘normal’ afternoon of rugby at Dubai Exiles RFC. The Premiership match with Dubai Tigers Rugby Club had been moved to Saturday afternoon, but the Exiles were back on their home pitch at The Sevens Stadium overlooked by a busy, but socially distanced, audience from the Exiles‘ clubhouse.

Epeli Davetawalu has his game face on

The Exiles were the first out of the starting blocks, in next to no time they found themselves under the Dubai Tigers‘ goal posts, Epeli Davetawalu thumping the ball up the middle and almost scoring under the posts in the first 30 seconds. As the ruck sorted itself out, the Dubai Tigers flooded the wrong side of the field and left the Exiles with a 3 on 2. The Tigers‘ wing had too many decisions to make and inevitably Jaen Botes strolled over the try line for the first score of the match.

Less than a minute later and the Exiles were over the try line again. Dubai Tigers kicked the restart and then gathered around the ensuing ruck after teenager Nick Crampton took the first of his many direct lines for the Exiles. The ball was swung to the left for Schalk Du Preez to outstrip the scrambling Tigers defence and just when the Tigers full back was about to make his presence felt, the ball was offloaded to supporting Conor Kennedy to score the first of his 3 tries. A superb conversion from out wide by DuRandt Gerber took the score to 12 – 0 for the Exiles, with only 2 minutes played.

The danger with having a couple of good scores so early in a match is that play can get very loose and inaccurate, very quickly. That’s exactly what happened. The rest of the opening period was a litany of dropped passes and knock ons for the Dubai Exiles, allowing the Dubai Tigers to get themselves into the game. If it wasn’t for some outstanding Exiles‘ defence the Tigers would have been across the whitewash in the first period, as it was, it ended 12 – 0 to Exiles.

Jarrod Eglen had another barnstorming game

Jaen Botes sends it between his legs

Throughout the first period the Tigers had every reason to believe they were in the game, the early Exiles blitz had seemed like a distant memory and the scoreboard, after all, doesn’t lie. But, whatever was said in the Exiles huddle during the interval seemed to have an effect.

The Exiles ran in 5 tries in the second period. Passes that were not sticking had suddenly found some glue and the pace of the game had been upped significantly. The first try of the second period was scored by another Exiles‘ teenager, Seb Sabania, heavily involved in the build up, Seb then found a way through some weak Tigers‘ tackling and open the second period scoring under the posts.

Dubai Tigers Rugby Club did get a score on the board, some lazy defence from the Exiles allowed the Tigers‘ busy scrum half to scamper over the line, almost unopposed.

Unfortunately for the Tigers, the score sparked the Exiles and almost immediately from the restart, Nick Crampton, who seems to be enjoying himself in his first season of senior rugby, replied with another Exiles 5 points. Schalk Du Preez quickly grabbed himself a brace, the first was a sprint onto a kick through and the second he outpaced everybody on the park and scored under the posts, he even fancied the conversion himself.

Schalk Du Preez dives in for his first of 2 tries

Carel Thomas grabbed the final try of the period, a quick snipe from a ruck on the Tigers try line and the fleet footed Namibian was over for his first of 2 tries. 43 – 7 to Exiles.

5 more tries in the third period for the Exiles. Conor Kennedy was his usual elusive self and repeatedly caused all sorts of problems for the Tigers. Carel Thomas finished off what was arguably the best try of the match. The Exiles had swept into the left hand side of the Tigers‘ 22, Schalk Du Preez had again left the Tigers defence in his wake and eaten up 60 metres before getting scragged by a desperate full back. When it looked like too many Tigers defenders had managed to get back a cross field kick from another Exiles‘ teenager, Robbie Sproul, sent the ball to the opposite side of the pitch for Conor Kennedy to gather, an inside pass, a sublime offload from Jarrod Eglen and Carel was over the line for his second try.

Justin Walsh was the next to score for Dubai Exiles RFC. With several Tigers defenders around him he unexpectedly and inexplicably emerged from the pack and strolled over the line for the Exiles penultimate score.

Fittingly, the final score of the match went to another Exiles teenager. It’s been a feature this season to see many of the Exiles‘ under 19 squad experiencing life in UAE Premiership rugby. 7 of the Exiles‘ match day squad of 18 for this Premiership match with the Tigers were under 19 players.

Hannes Kruger was the teenager that bagged the Exiles‘ twelfth and final try of the game. A perfectly delivered pass from the vastly experienced DuRandt Gerber had put the young man into acres of space and away to the posts – a score that brought to a close an Exiles‘ win by 76 points to 12.