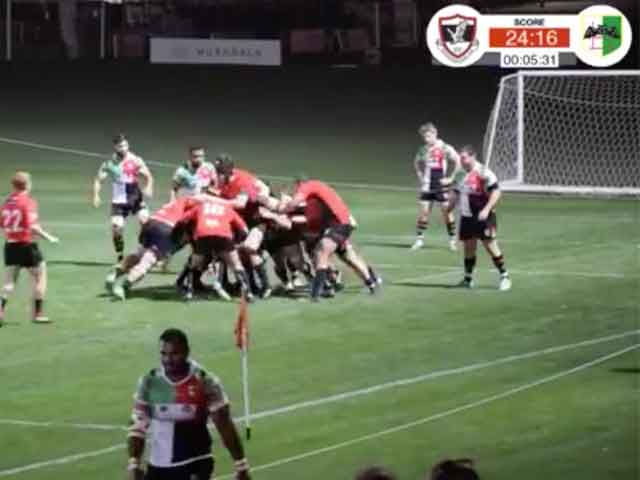 The Dubai Exiles produced a dominant second half display to dispatch home side, Abu Dhabi Harlequins, in the West Asia Premiership semi-final…

The Abu Dhabi Harlequins have been the team to beat in the UAE Premiership this season, having already posted a powerful and dominant performance over the Exiles earlier in the season, the Harlequins went into this match as red hot favourites.

It was a windy evening at Zayed Sports City and having won the coin toss, the Exiles elected to play with the strong breeze at their backs. Early exchanges were powerful and direct from both sides but it was the Exiles that opened the scoring after just 2 minutes with a penalty from outside half DuRandt Gerber. 0 – 3 to the Exiles.

Most of the rugby was being played by the Exiles, the opportunities for sweeping attacks in the wide channels being chiseled out by a gritty forwards display. Only forced last passes, a symptom that has infected the Exiles all season, stopped the score board from ticking at a fast rate.

On the Harlequins first visit to the Exiles’s 22, a dominant Abu Dhabi scrum forced a penalty in front of the posts which the Abu Dhabi 10 converted. 3 – 3.

On the half hour mark, a misfiring Abu Dhabi line out allowed the Exiles to steal possession in the Harlequins 22, the Exiles pack pounced on the ball, and Namibian scrum half Carel Thomas, passed the ball to Hooker Dave Gairn who tipped the ball on to Stephen Ferguson for the Northern Irishman to crash over the line. Converted by Gerber. 3 – 10 Exiles.

Almost immediately from the kick off, the Exiles gave away a soft penalty for offside after some initial good work in defence. 6 – 10 Exiles. The event repeated itself, but this time it was the Exiles who benefitted from and Abu Dhabi offside and DuRandt again stepped up to slot his kick. 6 – 13 to the Exiles at half time.

The first couple of minutes of the second half saw Abu Dhabi try and exert some serious pressure on the Exiles try line. A clean break through the Exiles defence and the Harlequins looked favourites to score first, but some excellent cover defence initially held the home side out, but a strong move to push the ball out wide put Abu Dhabi in for their first try which was converted. 13 – 13.

The Exiles decided to play ‘keep ball’ at this point, a decision which they’d stick with for the rest of the game, snuffing out Abu Dhabi’s attacking abilities and stretching their host’s defence. The early reward was a penalty which DuRandt Gerber again slotted between the posts into the strong wind. 13 – 16 Exiles.

The simplified game plan was working for the Exiles, and with 24 minutes of the match remaining, after some direct approach work by the forwards to the left hand side of the pitch the opportunity presented itself when plenty of space opened up on the other side. Some quick hands and good lines by the backs put full back, Ed Armitage, over the try line for what was a very well worked score. 13 – 21 Exiles.

The Exiles again conceded a soft penalty from the Harlequins restart, and the points on offer were gobbled up by the willing outside half. 16 – 21 Exiles.

With 8 minutes left on the clock, some lazy Abu Dhabi rucking led to the Harlequins coming in from the side which was quickly penalised and the Exiles moved the scoreboard along a little more. 16 – 24 Exiles.

A few minutes later and the Exiles were again on the attack in the Abu Dhabi 22, they had been far more patient and poised in the second half, good ball retention and an enthusiasm to keep working the ball forward, rather than try and score off every phase, eventually led the Exiles replacement Johan Watermeyer powering over into the corner to score. Converted again by DuRandt Gerber.