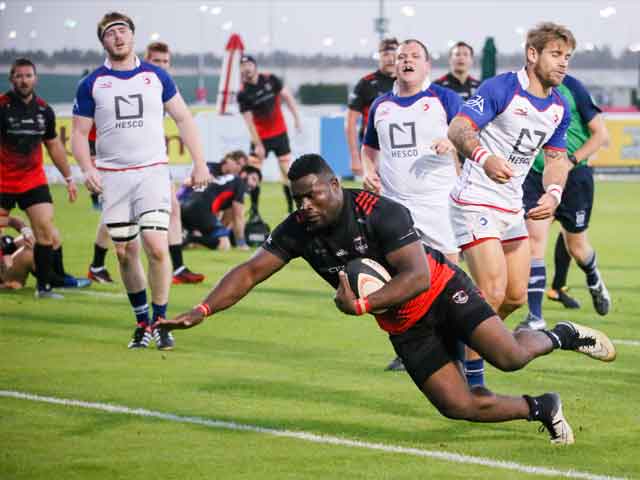 It’s no secret in Dubai that there is quite a rivalry between the Dubai Exiles and the Jebel Ali Dragons, the Dragons made the trip along the Al Ain Road to the Sevens Stadium to take on the Exiles in the West Asia and UAE Premiership…

For some unknown reason it’s been traditional this season for the Exiles to start slowly in their matches and only come to life after a quarter of the match has drifted by. The opening exchanges were tentative, with both sides probing at each other’s defence in turn.

After 5 minutes the game sprung into life when South African centre Thinus Steyn broke through the Dragons defensive line with Fijian wing, Jerry Baleilautoka in tow. With a glaring 2 on 1 for the Exiles, the centre inexplicably held onto the ball when a simple pass would have put the Fijian speedster in for a score. The error was compounded when penalised for a double movement, and with the Dragons looking to go quickly from their own try line, Exiles prop Lukas Waddington blocked the Dragons wing and was promptly yellow carded for his effort.

The Dragons opened the scoring after 16 minutes, a catch and drive inside the Exiles 22 and a very patient maul saw the Dragons gain good yards before the ball squirted out to one of their backs on the blind side who strolled across the line. Converted. 0 – 7 to the Dragons.

The Exiles replied quickly. After a couple of minutes play, the Dragons infringed with an offside and Exiles outside half, DuRandt Gerber, pushed the ball into the Dragons’ 22. The line out was gathered and Lock Tom Gregory crashed over the line for the score. 5 – 7 to the Dragons.

Straight from the restart, the Exiles failed to regather the ball, a put in at the scrum to the Dragons and they were immediately sweeping into the Exiles 22. With the Exiles defence stretched across the field, the Dragons attacked the left side of the field and sent their prop over in the corner. Converted. 5 – 14 to the Dragons.

It was all Dragon at this point, they again worked the ball into the Exiles 22 and some lovely footwork from their Fijian wing sent him skipping through two defenders for a score. 5 – 19 to the Dragons.

From the restart, the Exiles gathered the ball and almost immediately broke the defence of the Dragons, centre Thinus Steyn picking a lovely short line off a well weighted pass from Gerber. The South African made no mistake this time and scampered his way to the try line. Converted by Gerber. Half time, 12 – 19 to the Dragons.

The second half kicked off with things becoming interesting, the Dragons were ahead on the scoreboard, but momentum had swung to the Exiles. More or less, straight from the kick off, big Cameroonian back row, Giovany Makongo exploded through the Dragons line, some desperate defence saw the big man drag a couple of Dragons players to the 5 meter line before eventually being hauled down. The Exiles quickly recycled the ball, and with big Gio back on his feet he powered over from a few meters out. Converted by Gerber. 19 – 19.

The Dragons restarted and the ball again found itself in the hands of the powerful Cameroonian, he again broke through the Dragons defence but his effort looked to have been wasted when he tried to offload the ball in contact. The Dragons regathered the ball but were bundled into touch.

From the ensuing line out, the Exiles again turned the ball over to the Dragons who in turn gave it back to the Exiles. Play had settled on the half way line, when centre Thinus Steyn again took a short ball through the middle of the Dragons line and again set off for the try line. Only an excellent tackle from the full back snuffed the chance out, the ball was hastily cleared but only reached Exiles wing, Jerry Baleilautoka who ran it straight back at the heart of the Dragons. What looked like a ‘no arms’ tackle brought the Fijian down 5 meters short of the try line and the ball was quickly recycled for the big Cameroonian to again crash over the line for 5 points. Converted. 26 – 19 to the Exiles.

The Dragons were beginning to hold onto the ball and exert some pressure on the Exiles defence, after a sustained period of sensible ‘keep ball’ they found themselves with a scrum, deep inside the Exiles 22. A series of penalties ensued, which eventually cumulated in the Dragons scoring beneath the posts. With the travelling Dragons supporters in full cry the score was 26 – 26.

At this point in the game, it was all Dragons, possession and territory, this manifested itself with a kickable penalty to the Dragons inside the Exiles 22. The Dragons outside half obliged and slotted the ball neatly between the uprights. 26 – 29 to the Dragons.

The situation required some urgency from the Exiles, and they certainly delivered. Spurning a simple penalty kick, replacement scrum half, Carel Thomas tapped the ball to himself and he set off into the Dragons’ 22. When he was brought down, he popped the ball off the floor to centre James Crossley who, when it looked like he might go nowhere, bulldozed his way through 3 would be tacklers and over the try line. What looked like a perfectly good try for the Exiles was ruled out by the Assistant Referee for a claimed knock on during the act of scoring.

A couple of minutes later and the Exiles got the result their efforts deserved. After a series of ‘pick and goes’ by the forwards in the Dragons’ 22, the ball was eventually shifted to the Exiles back line, with most of the Dragons defenders sucked in to defend the drives, there was plenty of space out wide for Jerry Baleilautoka to run in for the score. An excellent conversion from out wide by DuRandt Gerber and the Exiles were in front with only a handful of minutes to go. 33 – 29  to the Exiles.

It would have been a relatively simple idea to shut up shop and build through the phases at this point. However, the Exiles were still looking to play rugby, there were a couple of ‘hearts in mouths’ moments after sloppy Exiles play kept handing opportunities to the Dragons.

The game was eventually put to bed by Charlie Sargent after his last ditch try saving tackle on the Dragons wing ended the Dragons’ hopes.