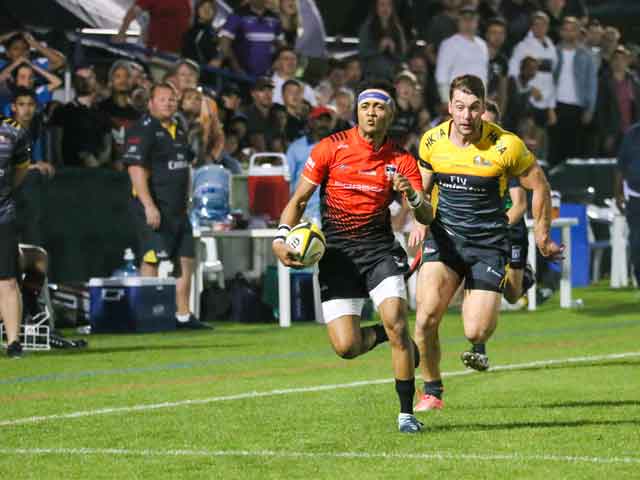 With a guaranteed West Asia Premiership semi-final place up for grabs, the Exiles went into a ‘must win’ match against local rivals, the Dubai Hurricanes. Returning for the Exiles from long term injuries were 2 of their UAE Internationals – Matt Mills and Jaen Botes, both adding their considerable experience to the Exiles back row.

From the kick off returning back row forward and UAE International Jaen Botes made his presence felt with a powerful run. Some quick passing along the back line saw the Dubai Exiles create space to attack but some sloppy hands in the centre meant that the chance to open the scoring was lost.

It was the Hurricanes that opened the scoring with a simple penalty after the Exiles were caught offside in from of their posts, the Hurricanes outside half sided the penalty in with the help of the upright. 3 – 0 to the Hurricanes.

Again from the kick off, the Exiles squandered another attacking opportunity with some sloppy play, trying to move the ball out wide when there was no need to do so, the ball was knocked on and the Hurricanes were again in possession. Their attack was snuffed out with some excellent defence in the middle of the park from Tom Gregory and Jaen Botes, holding up the Hurricanes player in the tackle and winning the scrum feed. The Hurricanes were penalised at the resulting scrum and South African DuRandt Gerber stepped up with a chance to level the scores but the ball drifted outside of the upright.

The Exiles were looking potent in attack, but in the opening exchanges they were repeatedly guilty of overplaying, trying to force the last pass, or make something special happen when the easiest thing to do would be retain possession. This fact was demonstrated well when the Exiles opened their scoring account with simple line out catch and drive, well set maul, and a rumble across the try line. 3 – 5 to the Exiles.

The Hurricanes responded quickly. Against the run of play, after a long clearing kick, the Hurricanes collared Exiles full back Charlie Sargent in his in-goal and we awarded a 5 meter scrum, confusion between the Exiles Numbers 10 and 12 allowed the Hurricanes outside half to slip between them and power in for a try which was promptly converted. 10 – 5 to the Hurricanes.

The Hurricanes chalked up another score from a Lin out in the Exiles 22, when everybody was expecting a catch and drive they moved the ball wide, and some slick hands in the centre released their wing to score in the corner. 15 – 5 to the Hurricanes.

The first half was developing into a shoot out, the Exiles were making plenty of ground and playing some nice rugby, had it not been for those unnecessary final passes they would probably have been ahead on the scoreboard themselves. Simple rugby was the order of the day for the Exiles and another catch and drive in the Hurricanes 22 saw them again crash over the try line, this time the conversion was successful. 15 – 12.

The match was hotting up now, and after some exchanges of possession, attack and defence, and with little time left before the half time whistle, the Exiles spotted some space out wide and a long, looping pass from Gerber released Fijian winger Jerry Baleilautoka one on one with the Hurricanes full back and the winger delivered the footwork to score on the corner. Converted by Gerber. 15 – 19 to the Exiles.

Both teams were aware of what was required in the second half of this match, but it was the Exiles that looked increasingly confident and playing powerful and simple rugby. After some excellent phase play and with an offside advantage, the Exiles let the ball race to the outside, when it looked simpler to score than to not to, the final pass hit the ground and was knocked on. The referee pulled the play back and Gerber kicked the penalty. 15 – 22 to the Exiles.

TheExiles back row were getting their tails up, and the returning pair of Matt Mills and Jaen Botes were becoming increasingly destructive in the middle of the field, snuffing out Hurricanes attacks behind the gain line. The Exiles were playing good rugby now, retaining the ball and working through the phases, after a sustained period or pressure in the Hurricanes 22, the inevitable penalty came which was again slotted over by the Exiles outside half, Gerber. 15 – 25.

It was not by accident that ‘simple rugby’ is what was causing the damage to the Hurricanes, after a lovely interchange between Gerber and centre Thinus Steyn, the centre found himself in acres of space and when eventually tackled by the full back, the Exiles again held the ball and built the phases and pressure until Jaen Botes crashed over the line near the posts. 15 – 32.

Believing that the match was comfortable won, the Exiles were guilty of taking their foot off the gas, some loose kicking at the end allowed the Hurricanes to set the nerves jangling with a couple of scores. However, there was not enough time for them to mount a game winning comeback and the Exiles ran out winners by 27 – 32.