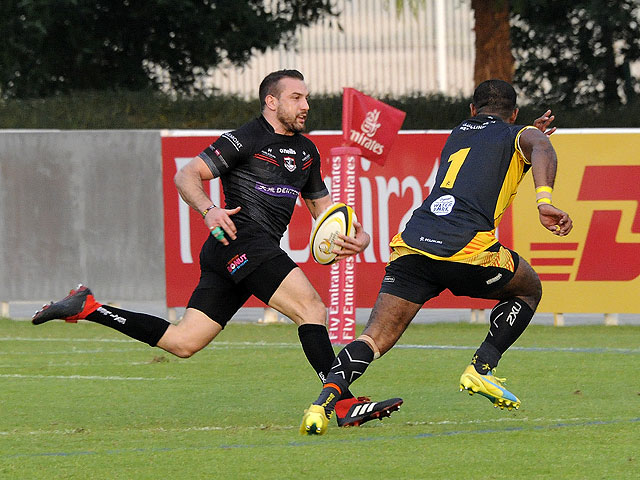 The 2019/20 season opener in the West Asia / UAE Premiership picked up where the previous season left off, a final kick of the match to win a hard-fought contest at Dubai Hurricanes. This time however, there was no debate about whether or not the ball had gone over the crossbar, Exiles number 10 DuRandt Gerber sent the ball sailing through the uprights for a memorable opening win with the final kick of the match.

The early exchanges were typically robust as the neighbouring sides tested each other’s resolve around the breakdown, the Hurricanes Number 8 repeatedly proving to be a nuisance and requiring significant attention to mute his carries.

The Exiles were winning the early territory battle, and having spurned a golden opportunity to release wing, Justin Walsh, Exiles were 0 – 6 up with 2 penalties from DuRandt rather than what could have and should have been 0 – 14 up.

The first half was littered with handling errors from both sides, nerves, humidity or possibly a combination of both. The Exiles were frequently guilty of throwing misguided passes and in a repeat of last season, lacking patience and trying to force openings rather than retaining possession and building pressure.

With so many handling errors, srums made a frequent appearance, in what would prove to be a major asset to the Exiles.

The Hurricanes pulled a score back, just before half time with a relatively simple penalty kick almost in front of the posts.

The Hurricanes came out of the blocks a lot quicker in the second half and after some indecision in defence scored out wide in the corner. Exiles full back, Conor Kennedy sold himself for an interception attempt, almost getting to the ball, he would have had an 80 meter foot race to the try line, but unfortunately for his effort, he was rewarded with the Hurricanes wing having a clear run to the Exiles goal line. 8 – 6 Hurricanes.

More was to follow when another score for the Hurricanes beefed their lead to 13 – 6. The ‘Canes looked like they were getting the upper hand, much to the delight of the home support.

A feature of last season was the Exiles ability to gather themselves when under the cosh. The Exiles scrum was now completely dominant, often splintering their opponents and driving them off the ball. A series of penalties ensued which allowed the Exiles to kick themselves into the 22 for South African Number 8 Jaen Botes to crash over the line from a well set up driving maul. Converted by Gerber. 13 – 13.

At this point, the Hurricanes scrum was in full white flag retreat, they simply couldn’t handle the Exiles pack who were blowing them apart at every opportunity. Defensive scrums for the Hurricanes, even with their put in, had become easy attacking opportunities for the Exiles.

In one period of the second half, camped 5 meters out from the ‘Canes try line, 5 or 6 scrum penalties were awarded in succession for the ‘Canes deliberately collapsing the scrum. The Exiles kept scrummaging and the ‘Canes kept collapsing and the many supporters of both sides waited for the inevitable penalty try and seven points. Inexplicably that penalty try never came.

However, a few minutes later, big French second row, Tim Fonade broke through a tackle and took off for the try line, when he was eventually hauled down, open side flanker, Matt Mills was on hand to score to the right of the posts. Converted by Gerber. 13 – 20 Exiles.

With the clock ticking down and the Exiles in complete ascendancy, we waited for the next Exiles score to kill the game off. However, a speculative kick over the top down the middle of the field from the Hurricanes Number 10 saw the ball bounce into the in-goal just beneath the posts. With the Hurricanes kick chase approaching, the Exiles failed to minor the ball and a desperate Hurricanes hand got there first, an easy conversion and the scores were 20 – 20 with less than 5 minutes to play.

From the kick off, the Exiles swept into the Hurricanes half and immediately put them under pressure, phase after phase of Exiles attack resulted in a penalty advantage to the visiting side. A quick tap and go received howls of derision from the Exiles bench when it looked like the Exiles were going to come up short. Centre Paul Tupai being stopped just short of the line. With great relief, the referee took play back to the original infringement, and Gerber stepped up and slotted the ball with the final kick of the match.