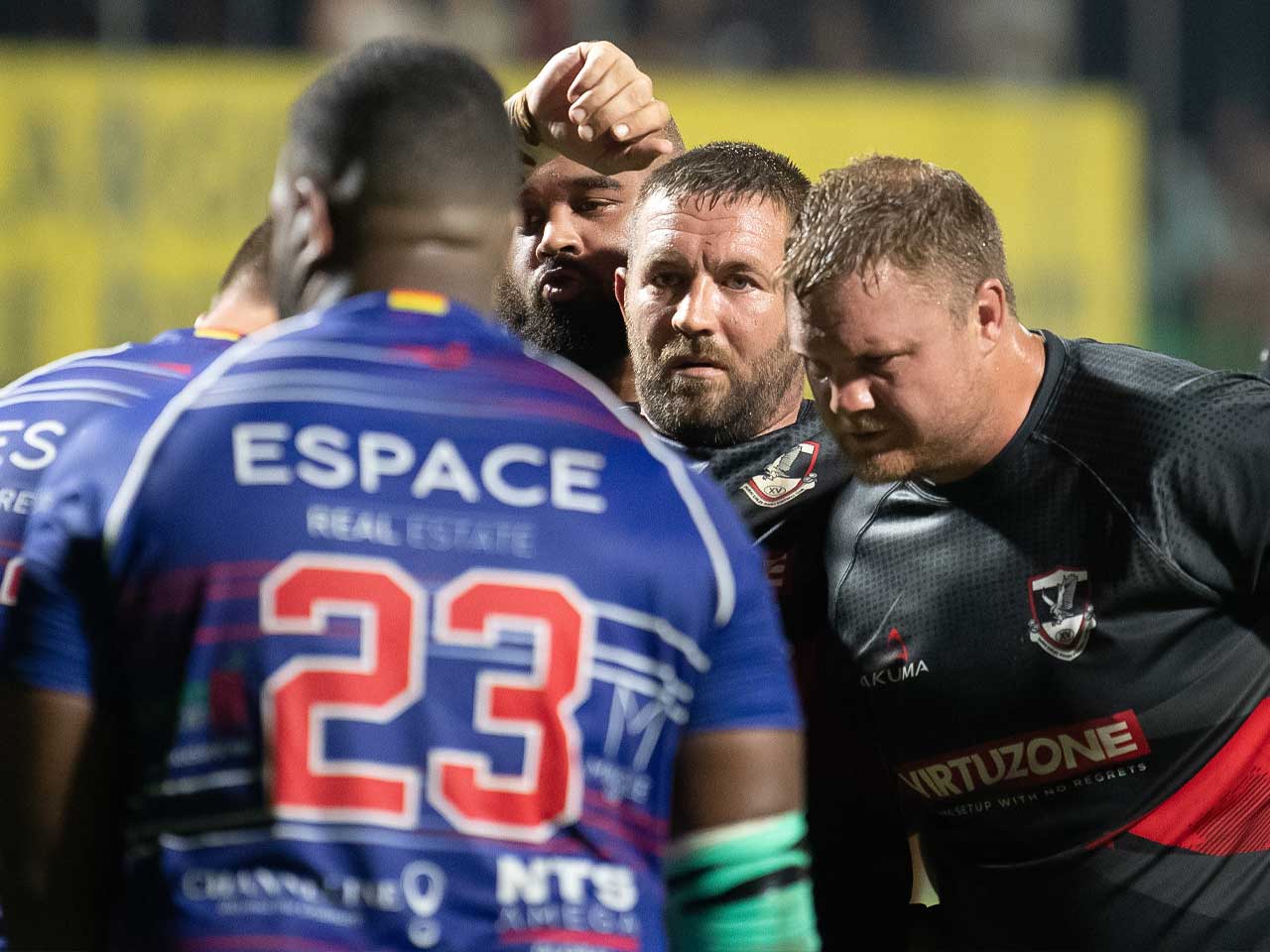 Dubai Exiles Director of Rugby, Jacques Benade, will be left scratching his head after the Exiles fell to another defeat and an 0 – 3 record in the opening rounds of the West Asia and UAE Premierships. It was a similar story to the previous two matches of the 2022-23 campaign against Bahrain and the Tigers. Loose kicks, wayward lineouts, missed tackles and a desire to play rugby out of the 22 irrespective of what’s on the scoreboard…

Exiles’ Clarke Smith and Justin Walsh have a discussion

Anthony Kapp up close and personal

The Dragons were on the scoreboard in the opening two minutes. A loose clearance kick from Exiles‘ fullback Conor Kennedy skewed its way infield to be comfortably gathered by the Dragons‘ wing. Teenager, Alfie Wilson, brought the charging Dragons‘ wing to ground but the ball was quickly recycled. With the Exiles‘ defence so narrow you could throw a small handkerchief over it, space was amply presented out on the right. Exiles‘ 18 year old wing, Dylan Bevan, missed the tackle and the Dragons were on the scoreboard. 5 – 0.

Justin Walsh‘s restart failed to reach the 10m presenting the Dragons with an opportunity to get immediate back on the front foot. From the scrum the Dragons‘ try scorer fancied the right hand side once again, another missed tackle on the right, but the Exiles‘ somehow managed to escape.

With 12 minutes on the clock Justin Walsh reconciled his earlier kick with a drop goal and 3 points on the board. The Exiles‘ had played multiple phases to get in front of the post and ‘Walshy‘ gave himself plenty of space and time to kick the goal. 5 – 3.

The score seemed to settle the men-in-black, and for the next few minutes they settled into a more familiar pattern. Anthony Kapp and Shane Weweje carrying hard and direct, the ball getting moved away from the contact area. Alfie Wilson briefly found himself in a lot of space in the Dragons‘ 22 but a desperate and looping last pass lost momentum and possession.

The Dragons defence was proving to be well organised and aggressive. Time and again slow ball for the Exiles was making it easy for the home side the shepherd the Exiles‘ attack and force unnecessary errors. The next Dragons score was all too easy. A soft penalty given away by the Exiles was sent into the 22 by the Dragons outside half. With possession gathered Exiles tackling went on vacation and the Dragons were across the line. Converted. 12 – 3.

On the half-hour mark play was stopped when Exiles centre, Jordan Ainslie, was injured when almost dancing his way through the Dragons‘ defence. The quick footed centre almost got the the try line, but an unlucky tackle from Dragons‘ second row, John Harris, sent the fleet footed Englishman off to Mediclinic Park View.

From the ensuing scrum Exiles‘ Number 8, Cornelis Steyn, picked up and drove over under the posts. Converted by Conor Kennedy. 12 – 10. Half Time.

When hooker Dave Gairn crossed the Dragons‘ try line in the opening minutes of the second half, anybody familiar with recent Exiles vs Dragons fixtures would have put the kettle on and settled back to the anticipated pushing of the Exiles‘ gas peddle, but not on this occasion. Kappy’s try had been converted by Conor Kennedy and the Exiles had a 12 – 17 lead but someone had disconnected the throttle body.

The Dragons‘ reply was swift. A soft penalty in the 22 again given away by the Exiles and the Dragons were 8 metres out with a lineout. Crisp hands across the backline and the Dragons‘ big left wing proved too strong for Alfie Wilson. 17 – 17.

For a brief moment it was a case of anything you can do… From the restart the Dragons gathered the ball but their scrum half sent his clearance kick straight into touch from outside the 22. An Exiles‘ lineout, an overthrow. When the ball hit the ground it was Anthony Kapp who reacted first and found himself with a clear run to the line. Converted by Conor Kennedy 17 – 24 to the Exiles. Three tries in the opening eight minutes of the second half!

With the Exiles up by 5 points and a hard earned scrum penalty, the curse of the wayward lineout once again reared its head. The Exiles had kicked themselves to just outside the Dragons‘ 22 but a missed throw in and the home side was once again on the move.

A penalty to the Dragons and their number 10 sent the ball deep into the Exiles‘ 22, once again. The ball was sent into the lineout, some hard drives at the Exiles‘ line were initially repelled, but with a penalty advantage the Dragons overloaded the short side to score in the corner. 22 – 24.

With time ricking away Conor Kennedy looked like he might have given the Exiles a sniff of a win when he slotted a penalty from beneath the Dragons‘ posts. 22 – 27 to the Exiles. The match was all set up for a barnstorming finish and a barnstorming finish it was. With less than a minute left on the clock the Dragons thumped their way over the Exiles‘ try line to pull the scores level. The conversion, just about the last kick of the game, sailed between the posts and the game was done. 29 – 27 to the Dragons. Final Score.