Tigers Payroll Pays Dividends as Exiles slip to 0 and 2 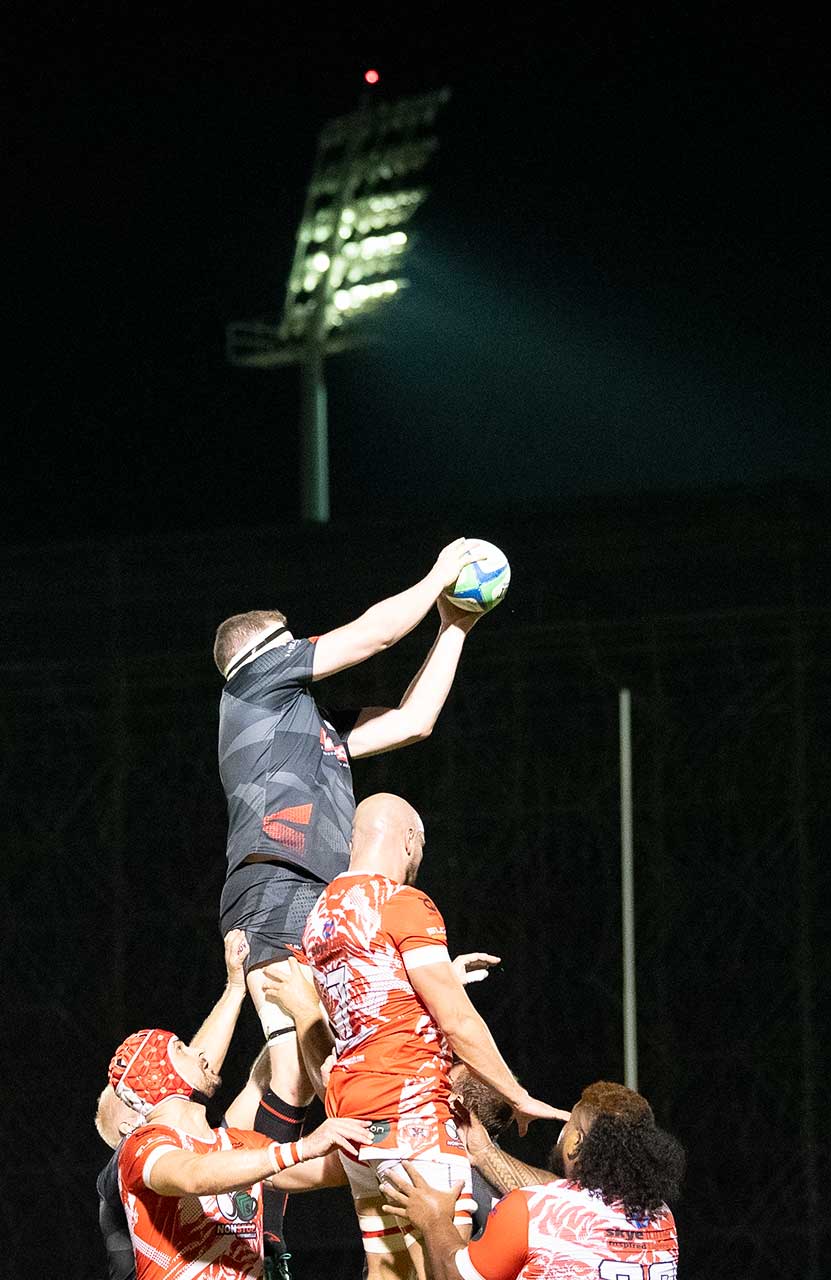 It was Round 2 of the West Asia Premiership and the opening match for the Exiles in their 2022-23 UAE Premiership rugby campaign against a visiting Dubai Tigers side that retained only 2 players from the 91 – 0 drubbing that they received at the hands of their hosts in the opening match of the 2021-22 campaign. One thing was for sure, with an almost entirely new roster, the Tigers were going to be a completely different proposition from the previous season.

UAE Captain Matt Mills heads onto Pitch 7 at The Sevens

From the kick off it was evident that the visitors, in red and white, to The Sevens Stadium were looking to physically impose themselves on the Exiles. From the moment the ball retuned to planet earth from the kick off the Tigers were carrying hard and fast into the men-in-black. A stray hand from an Exiles player in the ruck and it was an easy 3 points for former Wasps and London Welsh outside half, Will Robinson, to slot over in front of the posts. 0 – 3 to the Tigers.

The Exiles‘ response was almost immediate. From the restart, possession was gathered and the ball moved through the back line from side to side. With referee, James Fairbourn, signalling for an offside infringement, Exiles‘ fullback, Conor Kennedy, sent the ball across the touch line for an attacking Exiles lineout.

UAE captain, Matt Mills, collected Dave Gairn‘s throw for the Exiles to gather around and set off on a very good looking driving maul. When the Tigers eventually brought an end to the drive, it was Justin Walsh who peeled off and scored in the corner. Converted by Conor Kennedy. 7 – 3 to Exiles.

Jordan Ainslie does his best to escape the clutches of former Auckland Blue, Luke Braid

The Tigers immediately gave another penalty away from the restart. Former Manly Mariners and Clermont (French Top 14) prop, Duane Aholelei, did his best to unplug Exiles‘ flanker, Matt Mills‘ head from his body and the penalty was awarded by referee James Fairbourn.

With a throw in on the half way, Exiles‘ hooker, Dave Gairn, found Matt Mills at the tail of the lineout, who delivered the ball into the hands of scrum-half Carel Thomas. The ball was moved through the hands before Kenyan, Brad Owako, sent the ball out the back to Jordan Ainslie. A miss pass to Conor Kennedy and the Exiles were suddenly in space.

A deft left footed kick through from the Exiles fullback and centre Jordan Ainslie displayed his very rapid feet to score. 12 – 3 to the Exiles.

It was when the Exiles were 12 – 3 up and looking as if they were cruising, signs of a momentum shift began to appear. An overthrow from an attacking Exiles lineout, just outside the Tigers‘ 22, relieved the pressure and sent the Tigers on the attack. It was pure luck that the Tigers‘ wing, Niko Volavola, kicked the ball directly into touch to spare Exiles blushes.

Conor Kennedy gets ready to send a penalty into touch

It was the Exiles to next be ‘pinged’ for a high tackle. A simple enough ‘gimme’ and the deficit was reduced by 3 points. 12 – 6 to the Exiles. Justin Walsh sent the restart high into the Dubai night sky for flanker Anthony Kapp to catch when gravity took over and did its thing. The ball was moved in field only for yet another high shot, this time from Tigers‘, former Narbonne fly-half, Clint Eadie, to give away the penalty. Exiles were on the attack again, but another loose throw in and the chance had evaporated.

In a replay of the West Asia Premiership game against Bahrain the previous week, the Exiles‘ accuracy had gone on holiday and the men-in-black were doing everything they could to let the Tigers stay in the game. A knock-on, a scrum to the Tigers. The Exiles scrums went well in pre-season and with PE teachers Pieter Killian, Dave Gairn and science teacher, Tarek ‘Taz’ Mursal, getting the upper hand on their far more experienced opposition referee James Fairbourn gave the penalty. Converted by Conor Kennedy 15 – 6 to the Exiles.

It was around about now that the Exiles decided to push the self-destruct button. 25 minutes on the clock and so far the Tigers hadn’t created anything beyond the chance from the missed Exiles‘ lineout. A lineout to the Tigers on the half way, gathered by former Super Rugby Auckland Blues back row, Luke Braid, and the Tigers were off and charging into the heart of Exiles‘ defence. Play broke down when Tarek Mursal was adjudged to have made a high tackle on a Tigers player and the secondary science teacher found himself on the receiving end of a yellow card. Penalty. 3 points to the Tigers. 15 – 9 to Exiles. A minute later, another penalty, 15 – 12 to the Exiles.

The game had lost it’s momentum with so many penalties being given away from both sides. Straight from the restart, a cheap shot at a ruck gave Exiles fullback, Conor Kennedy, another shot at the posts which slid agonisingly to the left of the target.

From the 22 drop out what can only be described as a game of foot tennis briefly broke out, the ball being kicked from one team to the other. Clint Eadie won that particular kicking contest and found some space behind the Exiles‘ defence. When Exiles‘ flanker Matt Mills was tackled off the ball it was a simple run in for the Tigers, try given despite the protestations by Exiles‘ captain Pieter Killian to the referee. Converted. 15 – 19 to the Tigers.

Like a London bus the next score came along almost immediately, again it was from an Exiles‘ error. Another missed lineout, Tigers on the charge. The Exiles really were the architects of all of their own problems. With the clock in the first half red zone, a missed clearance, and the Tigers were again pushing on the Exiles‘ front door.

Former Western Raptors hooker, Kaybe Otukolo, is quite a unit

It was the Exiles who got out of the starting blocks in the second half. After a couple of quick rucks and with the referee signalling an advantage, Namibian scrum half Carel Thomas almost danced across the Tigers try line before being engulfed by a scrambling Tigers defence. The Exiles were still very much on the front foot, hammering at the Tigers try line, but when the door was just starting to creak open another wayward and ill-advised pass found its way into the grateful hands of Tigers‘ wing Niko Volavola who ran 98 metres to score. Converted. 15 – 33 to the Tigers.

For a few moments the Exiles‘ picked up the pace of the game and started to make inroads into the Tigers‘ defence. Hard carries at the far side of the pitch saw the men-in-black breach the Tigers line and into their 22. James Fairbourn ‘pinged’ the Tigers for killing the ball at a ruck and after some time off for a Tigers‘ injury, the ball kicked into the corner, the game was back on.

Substitute hooker Donal Spain hit his target and then found himself with the ball back in his hands. The Irishman carried hard into the Tigers‘ line before Exiles‘ Number 8 and former Dubai Hurricanes back row, Cornelis Steyn thumped his way over to score. Converted by Conor Kennedy. 22 – 33 to the Tigers.

The game had found its own rhythm in the second half after the early scores. A protracted arm-wrestle had ensued before another unnecessary Exiles‘ turnover had delivered the ball into the hands of a Tigers‘ player. A missed tackle from the Exiles and the Tigers were in space with support either side. A perfectly lifted chip kick over the final Exiles defender and the Tigers‘ wing, Niko Volavola, was over the line for his hat-trick. 22 – 40 to the Tigers.

The clock was ticking down and for all intents and purposes it looked like the result was a done deal. Exiles had 3 tries on the board and looking for a bonus point fourth score. The chance came when the Tigers scrum half was first sin binned for circumnavigating a ruck, that was quickly followed by a red card for former Auckland GTEC hooker Francis Schaumkel.

The score came almost immediately, the penalty kicked into the corner, a fortuitously missed lineout and the ball found its way into the hands of Exiles‘ second row, John Donnan. The former Ballynahinch RFC captain crashed his way over. Converted by Conor Kennedy. 29 – 40 to the Tigers.

With time ticking away the Exiles needed another score to come quickly. Running everything and playing ‘throw everything’  rugby they almost breached the Tigers‘ try line on several occasions but handling errors and wrong decisions at crucial  moments handed the win to the visitors. Final score Exiles 29 Tigers 40.