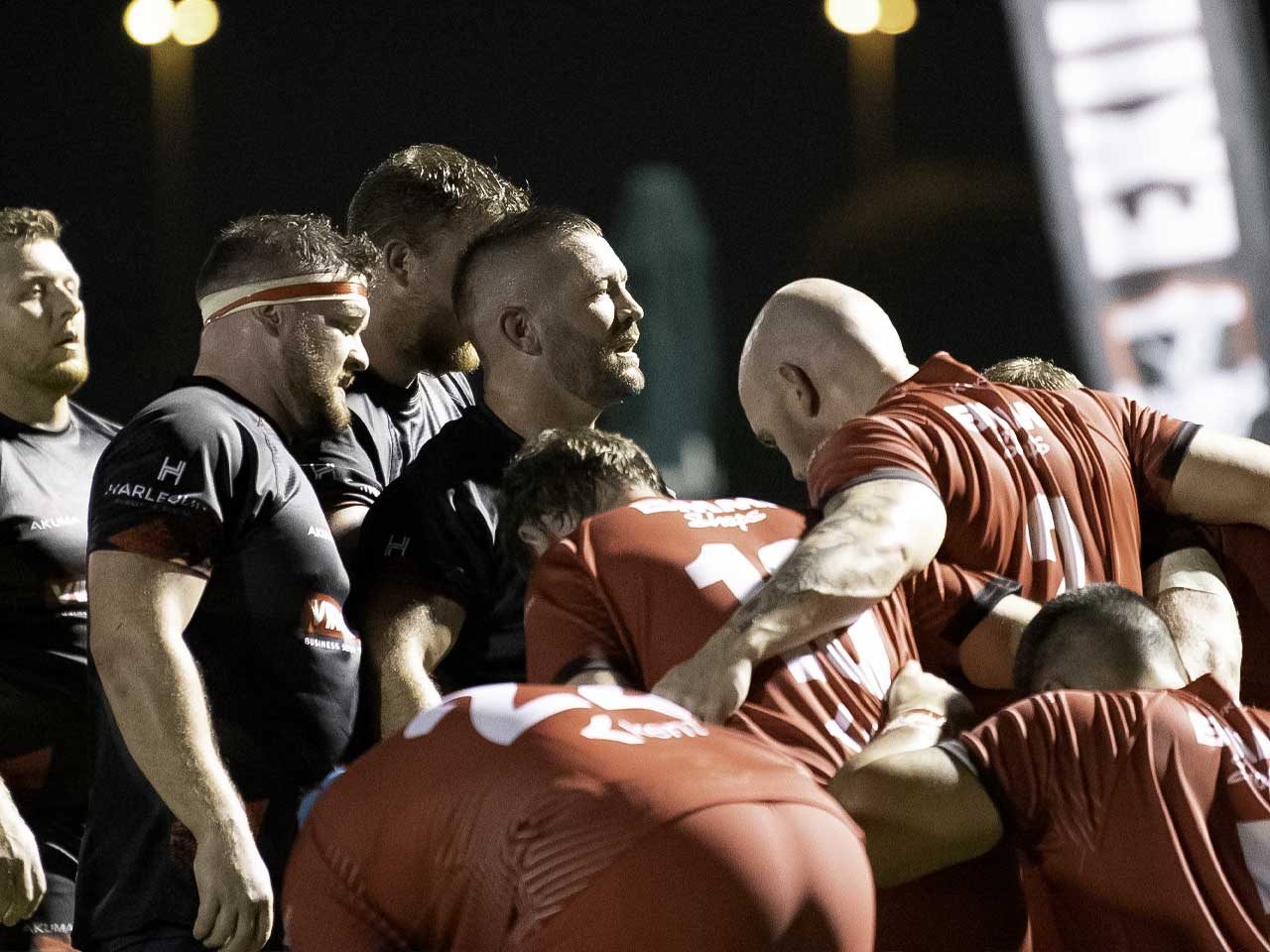 There could be no better fixture to celebrate the return of West Asia Premiership rugby than Dubai Exiles RFC v Bahrain. A big crowd had gathered at The Sevens Stadium to watch not only the opening fixture of the 2022-23 West Asia Premiership competition, but what was effectively the final that never was from the 2020-21 season that was cancelled due to the Covid pandemic.

The Exiles Under 11s escorted the Premiership side onto the pitch

There had been an anticipation in the build up to this match between Dubai Exiles RFC and Bahrain all week that it would be a close and gladiatorial game in which the result could go either way. One thing was for sure, with the current West Asia Premiership champions back in town, top-flight gulf rugby had returned and in those famous words of Maximus Decimus Meridius – “…are you not entertained? Is this not why you are here?!”

It was the Exiles who were first to post something on the scoreboard, a dominant Exiles scrum splintered the Bahrain eight and referee Simon Dodd promptly awarded a kickable penalty on the 10 metre line to the men-in-black. Exiles‘ full back Conor Kennedy promptly stepped up and sent the ball though the posts with plenty of room to spare. 3 – 0 Exiles.

The Exiles‘ Under 11s did a great job with he scoreboard!

Conor Kennedy boomed his first penalty through the uprights

In the early exchanges it was clear that the Exiles‘ pack were dominant in most facets of play. Even when Bahrain had possession the Exiles defence was picking off the visitors in the backfield way behind the gain line. Bahrain were simply not getting any forward momentum. The first real Exiles attack came from a wayward Bahrain lineout on the Exiles‘ 10 metre line. Bahrain hooker, Lindsey Gibson, skewed a throw to the back of the line for Exiles ‘newbie’, Cornelis Steyn, to collect and set off on a charge into Bahrain’s frantically organised defence.

A quick ruck and scrum half Carel Thomas sent Exiles captain Pieter Killian on the charge. The ball was being moved from left to right with some purpose, and when it was swung back across the pitch, Exiles‘ teenager Hannes Kruger picked a sublime line through a dog-legged defence, plucked the ball out of the air, and was unlucky to be bundled into touch in the Bahrain 22.

The Exiles ball boys did a great job

Bahrain were working hard to clear their lines, but, at least for the first 20 minutes of the match, struggling to get out of their own half. The Exiles defence was proving a smotheringly (yes, we know that’s not a word) tough nut to crack. More pressure from the Exiles and a simple penalty for Conor Kennedy to slot between the posts. 6 – 0 to the Exiles.

It was at this point that Christmas just started to make an appearance for Bahrain. A knock-on from the restart, offside in the middle of the pitch, and a gift wrapped 3 points for the Bahrain outside half who possessed a very, very, accurate boot. 6 – 3 to the Exiles.

By now the game has settled into its rhythm. Bahrain had found their feet and the match was turning into an incredibly physical encounter, Exiles were still dominant, but wayward and loose kicking, especially out of the Exiles‘ 22 was keeping Bahrain in the game.

Another gift wrapped soft penalty to Bahrain when the ball should have been 70 metres down the other end of the pitch and the scores were level. 6 – 6.

When the game looked like it would enter the half time break at 6 points each a fortuitous ricochet from the boot of Justin Walsh sent Exiles‘ Kenyan centre, Brad Owako, steaming through into the Bahrain backfield. An offload from the Kenyan wrecking ball but no chance for the supporting Carel Thomas to pick the ball up, his attempted hack through deflected off the Bahrain Number 8 and into touch.

John Donnan collected the lineout for the Exiles and promptly sent the Exiles pack on the charge in the Bahrain 22. A penalty advantage and Cornelis Steyn almost opened his Exiles try account but as judged to have dropped the ball when driving over the try line.

The Dubai Exiles opted for a scrum, voices from the Exiles‘ bench weren’t so sure and made it known that they thought that 3 points was the better option. Carel Thomas picked the ball from the scrum and sent Justin Walsh on a drive for the line, a quick ruck and Carel lifted the ball from the base, fed Conor Kennedy and some sublime hands off Irish centre Robbie Deegan sent teenager Alfie Wilson over the line to score. 11 – 6 to Exiles. Half Time.

As thoughts of just needing the next score to make the game a difficult proposition for Bahrain to claw back flitted through the minds of the gathered Exiles‘ support it was Bahrain who were next to make a mark on the scoreboard, a significant one it was too. With Bahrain‘s first real attack of the game, their number 10 surged into space and some weak Exiles tackling allowed him to offload to his supporting Hooker, Lindsey Gibson, for him to score next to the posts. Converted. 11 – 13 to Bahrain.

An Exiles match is obviously the place to be!

Simon Dodd awards a penalty to the Exiles

For the next few minutes it was the Exiles who were camped in the Bahrain 22. They must have fancies their chances too. Kickable penalty after kickable penalty was being turned down in favour of line outs and scrums. The Bahrain defence was working incredibly hard to repel attack after Exiles attack. Another penalty, another scrum, Robbie Deegan to Conor Kennedy and the fleet footed Zimbabwean fullback skipped around a Bahrain defender to put Justin Walsh through and across the line. Converted by Robbie Sproul. 18 – 13 to Exiles.

Christmas arrived for Bahrain. The only thing missing was snow and a sleigh, but by any stretch of the imagination Christmas had come early for the team in red. From the restart and heavily sliced clearance kick out of the Exiles 22 gave Bahrain an attacking lineout and they duly grabbed their gift wrapped opportunity with all 30 hands.

The lineout was collected, hard drives into the heart of the Exiles defence and the men-in-black were a defender short on the other side of the park. Converted. 18 – 20 to Bahrain.

Pieter Killian has a rumble

Exiles’ Brad Tuff gets to grips with things

With the clock ticking the game was well and truly in the balance. Exiles where on the attack and a penalty in the middle of the field gave Robbie Sproul an opportunity to push the Exiles‘ noses back in front. 21 – 20 to the Exiles.

It was frantic attack and frantic defence from both sides until Bahrain were awarded a penalty which their accurate 10 slotted between the posts from wide out on the right. 21 – 23 to Bahrain. Still all to play for.

After Exiles second row John Donnan collected a lineout throw outside the Bahrain 22, a dropped pass gave Bahrain an opportunity to clear the ball. A couple of rucks and the Bahrain scrum half sent the ball high into the air only for the Exiles wing to miss the catch. The ball was collected by the onrushing Bahrain attack, one pass and they were over the try line again. 21 – 28 to Bahrain. Game over?

With the clock in the red zone, it looked like the game was over for the Exiles, but a try by Robbie Sproul gave the Exiles the chance to level the scores if not to win the game. Conor Kennedy sent a penalty across the touch line, Brad Owako went on a trademark wrecking ball charge, the ball was recycled and when it looked like the Exiles had created space a thunderous tackle from Bahrain seemed to have snuffed out the the chance.

A conversion would have tied the scores – but the attempt slid left of the upright and Bahrain returned to Saar with the win in what was, for anybody who enjoys watching rugby, a high quality battle royal in the West Asia Premiership.