Exiles leave it too late at Jebel Ali 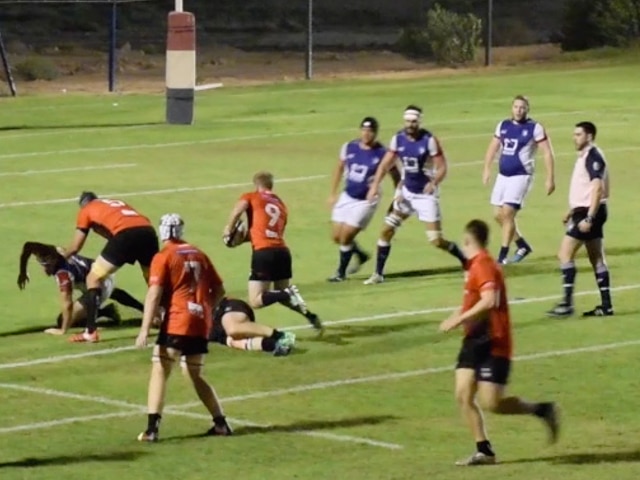 It was a breezy day at the Jebel Ali Dragons and despite a promising start, the Dubai Exiles left themselves with far too much ground to make up on their hosts.

The Exiles kicked off with a strong breeze blowing against them, the game’s early exchanges were enthusiastically physical with the Exiles enjoying the lion’s share of possession and momentum.  Scrum half Ed Armitage was busy at the breakdowns moving the ball quickly to willing support runners. Only some final lose handling stopped the Exiles from opening the scoring in the first few minutes of the game.

Against the initial run of play the Dragons opened the scoring with a penalty, the Exiles young number 7 Jesse Te Wharau being guilty of tackling a dragon player without the ball. 3 – 0 to the Dragons. Exiles outside half DuRandt Gerber quickly replied with a penalty of his own. 3 – 3.

The young flanker almost made up for his misdemeanour with a thunderous line break through the middle of the Dragon’s defence, only to be tackled with little or no support when rumbling his way towards the Jebel Ali posts.

The Dragons cleared, and only a lucky bounce of the ball into Exiles winger, Carel Thomas’s hands stopped the Dragons going over the line for what would have been a try against the run of play. The Exiles were dominating the early exchanges, and a searing break from Number 8 Matt Mills, from his own 22,  failed to register on the scoreboard when the Dragons outside half deliberately knocked on what would have been the scoring pass. DuRandt Gerber pushed the resulting penalty into the Dragon’s 22. A well executed line out sent the Exiles straight into the heart of the Dragons defence, but the Exiles are impatient and the move was eventually snuffed out with the Exiles wing getting bundled into touch.

With the strong wind to help, the Dragons clearing kicks were pushing the Exiles back 60 to 70 metres towards their now try line each time the Exiles turned the ball over. Despite all of the promise, the Exiles were getting punished for lack of patience when on the attack inside the Dragon’s 22.

With their first real attacking opportunity of the half, the Dragons found themselves in the Exiles 22 with their own throw in. A well constructed maul was formed and they set off towards the Exiles try line, advantage was given and when the penalty came the Dragons winger danced over the line for a score. The conversion was successful. 10 – 3 to the Dragons.

With the success of their last rolling maul, the Dragons decided to give it another go, and after making some good headway, some quick passing released their wing to score in the right hand corner, some lazy defence by the Exiles had left acres of space for the Dragons to attach, which they gratefully accepted. Again converted, 17 – 3.

It was the story of the half for the Exiles, every time they got into their opponent’s 22, they undid their own hard work by forcing the play when they only need to build phases and pressure, a penalty to the Dragons again saw the Exiles pushed back over 70 metres, and yet another, inevitable driving maul saw them go over for another 5 points and conversion, 24 – 10.

The Exiles were trying to play all of the rugby, but they were not playing the conditions, after good phase play to get a foothold in the Dragon’s 22, their hard work was again undone by a soft penalty, Cameroonian flanker Essome Makeongo kicking out while on the floor.

Another enormous clearing kick, another rolling maul, and despite some last minute good scrambling defence, the Dragons were again over for another try and another conversion. 31 – 10.

The Dragon’s game plan was simple and effective. Kick the ball into the Exiles 22, pressure the line out, force the error and score, that’s exactly what happened a couple of minutes after the last score. A crooked lineout throw be the Exiles eventually manifested in the Dragons full back crossing near the posts. 38 – 10 to the Dragons at half time.

The Dragon’s restarted the game and on receiving the kick off, some lovely play between scrum half Ed Armitage and outside half DuRandt Gerber put the Exiles number 10 through a big hole with Exiles hooker, Dave Gairn in support with some other members of the Exiles front row in attendance. The promising play ended abruptly when the Exiles prop was penalised for not releasing the ball in the tackle. Watching promising Exiles attack after attack ending in an inevitable penalty was becoming metronomic, and incredibly frustrating.

The Dragon’s opened the second half scoring when their number 9 went over the line unopposed from a scrum to the left of the posts, they found themselves 45 – 10 to the good over an Exiles side that looked shell shocked.

With the wind behind them, the Exiles started to probe the touch lines, again promising attacks were snubbed out because of loose passes and lack of patience until a pass stuck and German prop, Yanis Kienberger went over for an Exiles try. The conversion was pulled, 45 – 15 to the Dragons.

The Dragons were now forcing play, perhaps their lead was giving them the confidence to throw the ball around as if it was 15 man sevens game. A penalty to the Exiles saw them kick to the corner and the resulting phases eventually released Fijian wing Jerry Baleilautoka to score, DuRndt Gerber kicking the conversion. 45 – 22.

The Exiles were now playing the game that the Dragons were plying in the first half. A penalty pushed them forward into the 22 and some quick thinking between wing Carel Thomas and Gerber saw the outside half cruise over the line unopposed after receiving a quick thrown in from Thomas. Gerber converted his won try, 45 – 29.

The Dragons were starting to look tired, and form the kick off, some phases from the Exiles allowed them to build momentum into the Dragons 22 and when the opportunity presented itself, the Exiles scrum half, Ed Armitage, picked the ball up after a quick ruck to go through an enormous gap in the Dragons defence to score under the posts. Final score 45 – 36.