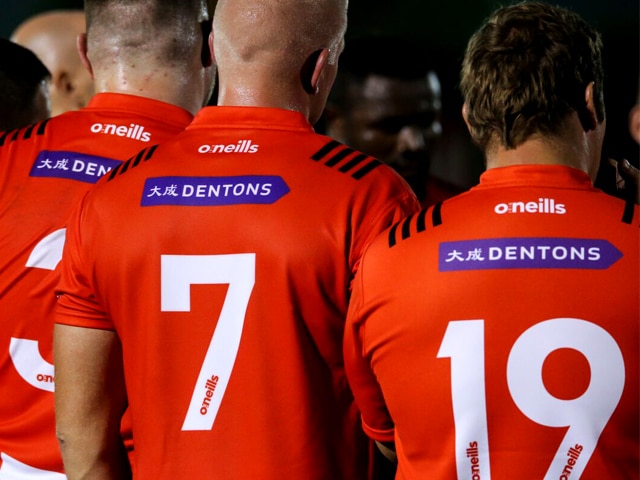 The Exiles headed down to Dubai Sports City for the West Asia and UAE Premiership clash with the DSC Eagles. The UAE’s newest Premiership side are a different proposition to the side that struggled to find any momentum in last season’s Premiership.

The Exiles kicked off playing from left to right from the stadium vantage point. From the kick off it was the Exiles that got off to a flyer scoring a well worked try within the first 2 minutes of the game. Some exceptional work from Exiles scrum half Ed Armitage pushed the Eagles back 20m towards their own try line, a quick pass and a cross-field kick from DuRandt Gerber was gathered by wing Charlie Sargent who popped an underarm pass to centre Michael Stubbs. Tackled well, Stubbs passed to centre Justin Walsh who straightened up the attack taking 2 defenders out of the game. Play swept into the centre of the field, the referee blew for an Eagles offside and kick thinking with a tap and go from Ed Armitage, a pass to Gerber who’s quick hands put the ball into the hands of full back Thinus Steyne who, when tackled, popped the ball to prop, Pieter Kilian over for the first try.

The match was uneventful for the next 10 minutes, both sides squandering any opportunity for continuity or to build pressure by dropping passes or turning the ball over in rucks. It was a humid evening and once again the ball seemed to have a similar feel to that of a bar of soap.

With 13 minutes on the clock, the Eagles looked to clear their lines from a defensive scrum on their own 10m line. A sliced kick from the Eagles number 10 sent the ball straight into the hands of Exiles full back Thinus Steyne who promptly set off on a great run near the sideline, some excellent support play and some quick hands sent Number 8 Jesse Te Wharau crashing into the heart of the Eagles defense. The ball was quickly recycled and a long pass to an unmarked Michael Stubbs left the centre with an unopposed run in to the try line. 0 – 10 to the Exiles.

The ‘bar of soap’ returned to the game and an indifferent 20 minutes followed with both sides unable to cause each other any real problems, however, the Eagles Number 8 was doing his best to carry the game to the Exiles and was by far the stand out player for the DSC Eagles.

As the half hour mark ticked past, the Exiles centre Justin Walsh pounced on an Eagles dropped ball and once again charged into a splintered Eagles defense, a loud blast from the referee and the Exiles had a penalty which was taken quickly by Ed Armitage, the attack was straightened by second row Tom Gregory and the ball moved to UAE international winger Charlie Sargent who almost snuck in at the corner but was foiled by an excellent cover tackle, much to the home crowd’s delight.

The Eagles failed to gather their own ball at the lineout, the Exiles drove the ball into the Eagles once again, quick hands across the back line and some excellent footwork from Sargent almost saw him cross the line but he was grounded just short. The ball was picked up by centre Justin Walsh who bulldozed his way the last 6 inches over the try line. Converted by Gerber, 0 – 17 to the Exiles.

On the stroke of half time, the Eagles, who had been playing close to the offside line all evening were finally pinged for a penalty under their own posts which Gerber slotted for the 3 points. Half time score: Eagles 0 – Exiles 20.

You could forgive the Exiles for thinking it was going to be an easy day at the office, but a loose clearance kick from the kick off was charged down by the Eagles which gave them an easy run in to the try line for a score beneath the Exiles posts. Easily converted, 7 – 20 to the Exiles.

The dreaded bar of soap returned once again, and over the next period neither side was able to build significant momentum, the Exiles guilty of dropping the final pass when all of the hard work to create the space had been done. The Eagles were now increasingly dependent on the hard work of their big carrying Number 8, Porter, as their only go forward.

The final quarter approached and Gerber, the Exiles fly half changed tack and started to attack the Eagles line. This seemed to cause all sorts of confusion for the Eagles defense who suddenly started narrowing and leaving space in the outside channels. It almost paid dividends when Charlie Sargent again almost got in at the corner after some nice initial play from Carel Thomas and Ross Byres. From the ensuing lineout, the Exiles once again stole Eagles ball and set up a driving maul which saw the big Camaroonian 6, Essome Josue crash over. Converted by Gerber. 7 – 27 to the Exiles.

The Exiles had simplified things which was bringing them great success, a few minutes later and they were once again on the Eagles 5m line looking to set up a rolling mall from their lineout. A clean take from Tom Gregory and the Exiles maul rolled over the line for a try by Gregory. Conversion missed. 7 – 32 to the Exiles.

The match was over as a contest, but that didn’t stop the Eagles doing their utmost to put some more points on the scoreboard and with 10 minutes left on the clock they got rewarded for some hard running and working a clever overlap to score on the wide right. The try was converted 14 – 32.

With just 5 minutes left on the clock, an Exiles scrum wide out in the Eagles 22 looked like the perfect opportunity to launch an attack. A solid scrum, Armitage to Gerber who again attacked the Eagles line set up a ruck under the Eagles post, another quick pass from Armitage to Matt Mills and on to the big 6 who thundered across the try line leaving a couple of Eagles defenders wondering what just hit them on the floor. Converted by Gerber, 14 – 39 to the Exiles.

As the game ticked into extra time, another driving maul by the Exiles saw Tom Gregory once again plunder another score to bring a shine to the scoreline. Converted by Gerber and the final whistle.