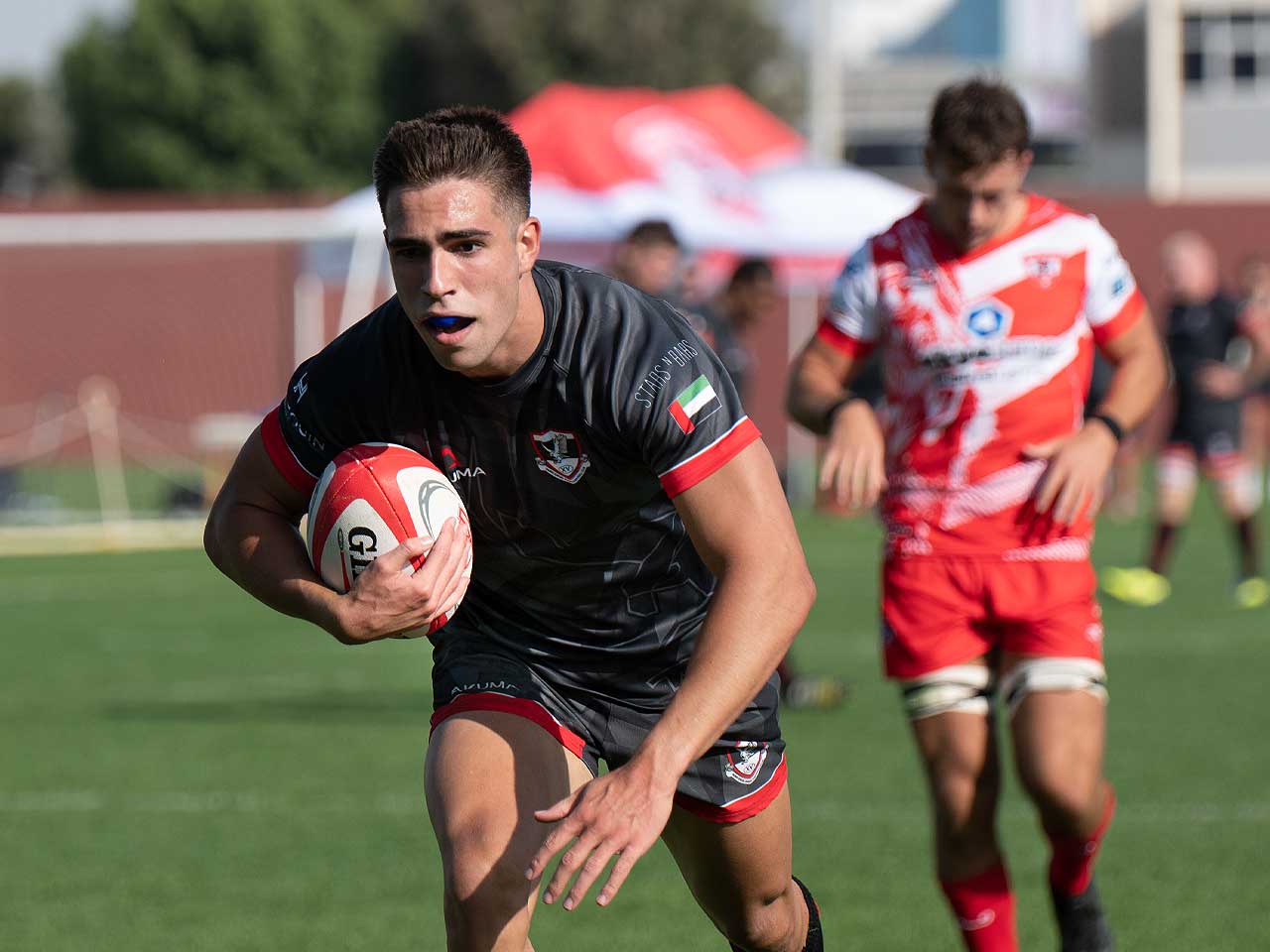 A new season, a new format and a lot of new rules. The Dubai Exiles went into their season opener with Dubai Tigers Rugby Club not really knowing what it would look like. The reigning UAE Premiership Champions were of course quietly confident of a win, but probably didn’t expect to run in 12 tries and score 76 unanswered points.

When the Dubai Exiles previously met with Dubai Tigers, home at The Sevens Stadium, they handed out a 76 – 13 rugby lesson to the Premiership new boys. With everybody feeling the impact of the Covid Pandemic, significant players having to leave the UAE due to the economic impact, both teams had a lot of new faces, Exiles having drawn heavily on last season’s under 19 squad – nobody really knew how this was going to go.

‘The Night’s Watch’ prepare to defend the North Wall

Australia Sevens’, Charlie Taylor, didn’t get an opportunity to shine

It was a cagey first few minutes and probably the most significant moment of the opening was Tigers’ new boy and Australia Sevens wing Charlie Taylor having to leave the field after unfortunately sustaining a broken leg.

When the first Exiles try came, Exiles made hard work of a 2 man overlap. A bit of ring rust was shaken off when Exiles’ Under 9 coach, Matt Mills, dabbed the ball down in the corner for the first 5 points. Less than a minute later and Exiles had their second try on the board, UAE International and generally large South African Jaen Botes sent the Tigers’ defense in the wrong direction and strolled across the try line.

With 10 points on the board in 10 minutes Exiles were building up a head of steam, passes were sticking and space was being attacked. Conor Kennedy had a fantastic day on the green stuff, after causing all sorts of problems for the Tigers defense he created a lot of space to give young Schalk Du Preez a clear run to the line for the Exiles’ third try.

When the first period ended, Exiles had 17 points on the board, Tigers were yet to post a score.

The Tigers kicked off for the second period, and from the first ruck the ball was swiftly moved left, 2 passes later and young Australian, Jarrod Eglen, embarrassed 3 would be Tigers defenders and crossed for try number 4. Jarrod made his senior debut for Dubai Exiles, aged 18, in last season’s Premiership win over Bahrain RFC, not only did he make is debut in that match, he also received the man-of-the-match accolade.

Epeli Davetawalu welcomes a Tigers player to the game

It was turning into one way traffic. From the restart some great running lines opened space once again, UAE International Matt Mills went through the wide gap and after fixing the final defender passed for Exiles’ new boy, Kenya Sevens International, Exiles mini rugby coach, Brad Owako to score under the posts. 0 – 31 to the Exiles.

The next score was arguably the best try of the match, scrum half Carel Thomas worked a loop with Exiles stalwart, DuRandt Gerber and found himself in acres of space, a well-timed pass and teenager Johannes Kruger showed some great footwork to navigate a Tigers defender and crashed over the try line at the end of the second period.

Conor Kennedy enjoyed himself all afternoon

Schalk Du Preez scores his first try of the game

Inexplicably, at the start of the third period, Dubai Tigers RFC decided to pick out Jarrod Eglen as their preferred kick off receiver. Young Jarrod gratefully accepted the ball and took off down the touch line. A very well executed in and out left the last Tigers defender in no mans land and Exiles were up to 48 points.

Big hitting Epeli Davetawalu is not only another Exiles’ UAE International, but the former Abu Dhabi Harlequins wrecking ball also coaches the Exiles’ minis and the Exiles’ under 19 girls squad. After exploding through some half hearted Tigers tackles, Epeli found Conor Kennedy who again caused all sorts of havoc in the Tigers defense before passing to Schalk Du Preez for his second try of the match. 0 – 55 to Exiles.

Jarrod Eglen scores the first of his trys

Brad Owako is one of those players who always has a smile on his face, he was beaming after the Tigers defense thought they’d stopped his bullocking run. When it looked like his run had been halted, Brad picked his legs up, stepped out of the Tigers tacklers and powered his way over the try line. 0 – 62 to the Exiles.

When try number 10 arrived, it was an example of teenage talent and what can happen if you let younger players develop their skills around senior and international players. 19 year old Nick Crampton split the Tigers defense and offloaded to another teenager, Justin Brits, a horrendously cheeky dummy and Brits was under the posts himself. 0 – 69 and 10 trys scored.

The final word went to powerful Fijian, Epeli Davetawalu. Conor Kennedy broke from the base of the ruck and passed to Exiles hooker and Exiles under 12 and under 15 girls coach, Dave Gairn. Dave was tackled, but an insane offload from the tackle put the extremely happy Fijian over the line for the final try of the match. 0 – 76 for the Dubai Exiles RFC.