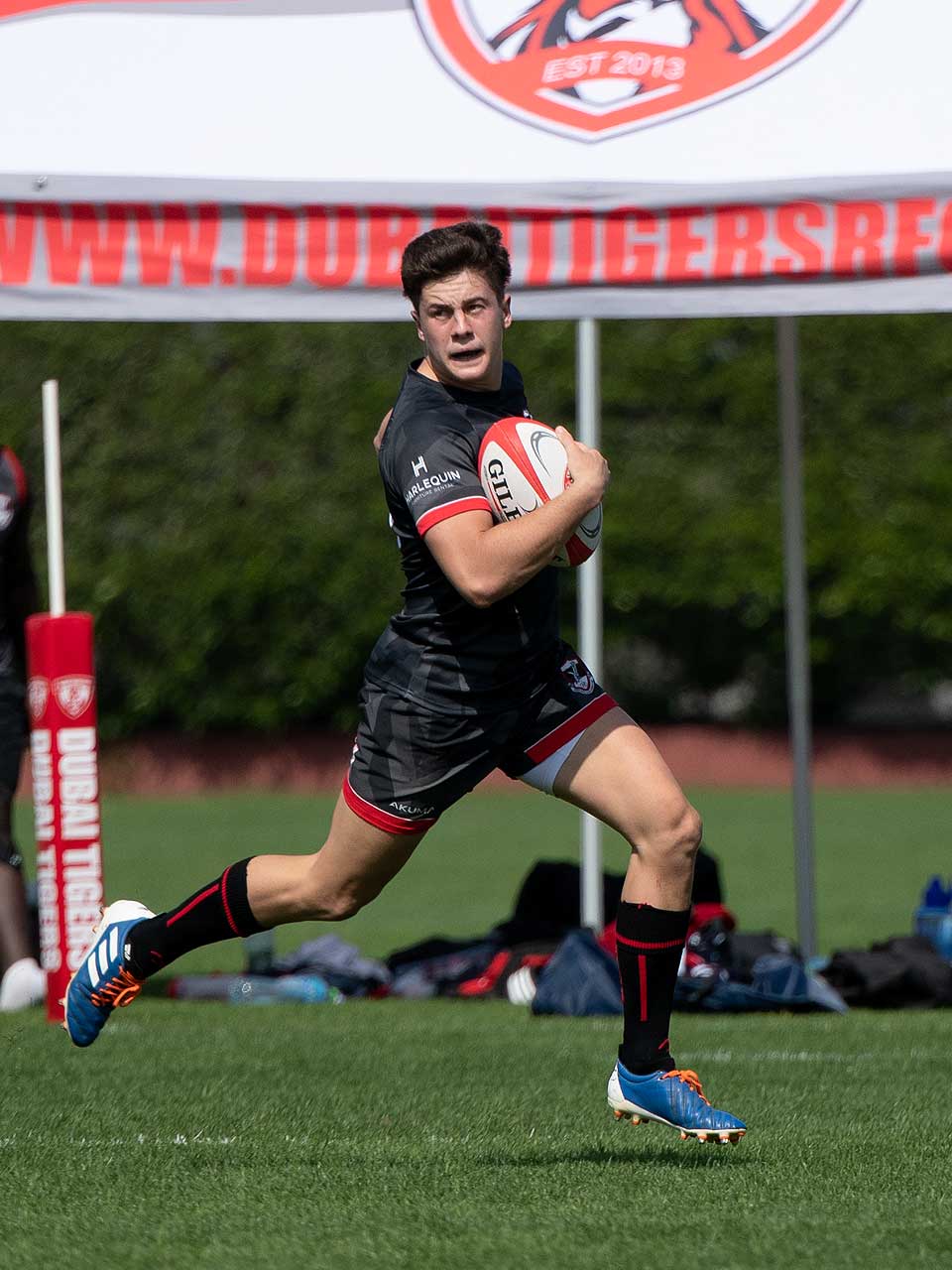 The Dubai Exiles got their Covid disrupted rugby season started on Friday with a trip to Dubai College to play Dubai Tigers RFC.

To sidestep Covid, the UAERF and Dubai Sports Council sanctioned a shortened format of the game which featured 3 x fifteen-minute periods, 10-a-side, no mauls, and no scrums. It might not be what the rugby purists were hoping for, but it certainly made for entertaining, and somewhat tiring for the players, games of rugby.

Some of the Exiles’ young guns

The Exiles‘ Division 1 side opened proceedings, a team mostly made up of eligible under 19 players with some more experienced senior players sprinkled through the 18 man squad to do some of the ‘heavy lifting’.

It’s been a long-standing policy of Dubai Exiles RFC to give a clear pathway to its Mini & Youth rugby players to play in the highest leagues in the Middle East and it was the younger contingent of the Exiles’ Division 1 side who ran away with a 64 to 38 point win over the ‘older heads’ of Dubai Tigers RFC.

With spectators unable to attend the match, the Division 1 game was streamed ‘live’ on the Exiles’ Facebook page and almost 1,500 people across the globe, friends, relatives and Exiles members watched from as far away as the United States, South Africa, France, United Kingdom, Canada as well as various places in Dubai and the UAE.

Sebastian Sebania on his way to the posts

The Exiles signaled their intent from the outset, the ball being moved from side to side, outside half Jamie Annand almost going through in the first minute, a quickly recycled ball saw Premiership prop, Pieter Kilian, try an audacious chip over the onrushing Tigers defense which almost came off. Tigers kicked to clear the pressure and as the ball was gathered, two passes across the field saw the Exiles’ Sebastian Sebania score the first try of the match in the corner.

The Tigers’ restart was a disaster, the ball kicked straight out on the full. From the resulting restart on the half-way, a quick pass from scrum half, Victor Pereira, sent Zander Visser away to score under the posts. The young men of Exiles were beginning to think that senior Division 1 rugby was easy.

Thusitha Samarathilaka had a powerful game

Keith Nyoni and Victor Pereira enjoy a break in play

The third try was a replay of the second. This time Jamie Annand finished off proceedings. Victor Pereira fed the ball to Annand who released Robbie Sproul to do all the damage to the Tigers inexplicable defense, an inside pass and Annand was left with a simple finish which he was delighted to grasp with both hands. As the first of 3 periods closed, Exiles were 0 – 24 up on their opponents, the 4th try coming after Zimbabwean, Keith Nyoni, popped a simple offload out of a tackle leaving the Exiles with a clear run to the posts.

The fifth Exiles try came of a howler by Dubai Tigers Rugby Club. After seemingly managing to find their hands in the second period, an unfathomably loose pass off the floor floated its way over the nearest Tigers player and straight into the hands of a grateful Dubai Exiles who again ran in the 45 meters to the posts, another 7 points for Dubai Exiles. Exiles now 31 points to the good. Just a minute later and Exiles were 38 points to the good, another kick off howler from the Tigers and Victor Pereira fed Jamie Anand who moved the ball swiftly to his left. When the ball reached the left hand touch line, Exiles swung it straight back the other way, Robbie Sproul put a clever chip over the top of the Tigers defense which he gathered himself to score under the posts.

Exiles Captain, Pieter Killian and the referee share a joke

Teenager Jamie Annand with the Exiles’ Legend that is Gareth Bacon

The Tigers finally got some points on the board after working themselves into the right corner with some direct running, a loose tackle let the Tigers’ centre crash over the line and put 5 points on the board for the hosts. The Exiles repost was almost immediate, try number 7, Pieter Killian seemed to be enjoying himself in the space and after fixing his defender a well-timed pass set Jaron Shelley away to score under the posts. 5 – 45 to Exiles.

You can’t blame the Exiles youngsters for becoming complacent, but the complacency led to coughing up a couple of soft trys, and as the second period closed, Exiles were in a commanding, but catchable, 19 – 45 lead.

Tigers RFC opened the scoring for the third period, with an Exiles player in the sin bin for 5 minutes, direct running from the Tigers again leading to a try under the posts, 26 – 45. Another soon followed and things were getting twitchy, 33 – 45.

Confidence was beginning to flow through the Tigers attack, but yet another loose pass in the middle of the park squashed a good opportunity, with the free kick awarded to Exiles, instead of a scrum, the ball was quickly moved from the restart and Zander Visser settled things down by grabbing himself a quick brace, try. 33 – 57.

Jaron Shelley on his way to 5 points

Exiles were chasing their 10th try of the match, it wasn’t long in coming. Robbie Sproul had enjoyed a fantastic game. It was fitting that he should wrap things up for the Exiles. Sprinting down the left wing, past the Exiles’ Premiership players who’d arrived for their match, he rounded and strolled under the posts. Philly Le Roux took the conversion and Exiles had 64 points on the board. The Tigers did have the last word, a consolation try in the last seconds, but the game was long gone. 38 – 64.