A Successful weekend in Abu Dhabi for the Exiles 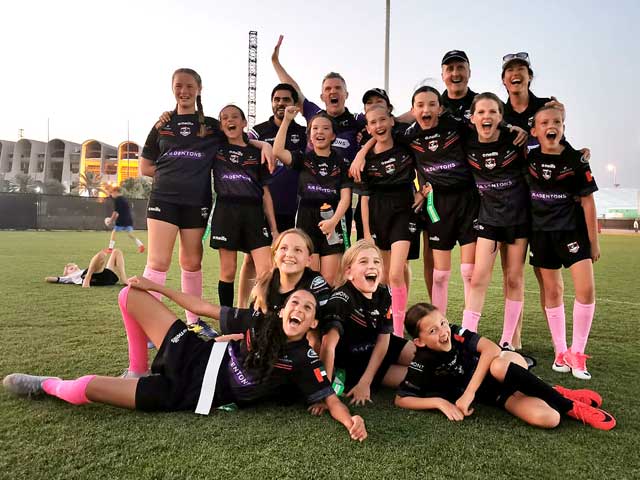 The 2019/20 Abu Dhabi Harlequins Tournament proved to be a successful weekend of rugby for the various participating age-grade Exiles teams who visited the capital.

The U12 Girls (Quick Rip) side triumphed over the Abu Dhabi Harlequins in the Cup final by 6 tries to 4. This was matched by Exiles U12 (boys) battling out a well earned victory over the Dubai Tigers in their Cup Final, winning by 1 try.

The Exiles U16 continued their impressive season but were made to battle by a well organised Knights / Eagles side eventually winning their Cup Final by 19 points to 14 in what was an arm wrestle of a game.

The Exiles U19 side defeated the Dubai Hurricanes by 22 – 10 in their Cup Final.

There were some other notable performances over the weekend. The Exiles U14 side reached their first Cup Final in a number of years, after a gargantuan effort they came up just short of returning to Dubai with the Cup.

The Exiles U9s also did themselves proud, another Cup Final reached by an Exiles side over the weekend, eventually losing out to the Dubai Tigers by 3 tries to 2.

An awful lot of thanks goes to the Team Managers, Coaches and parents who continue to give up their time to make rugby accessible and enjoyable to all ages and nationalities at Dubai Exiles Rugby Club. Thank you.