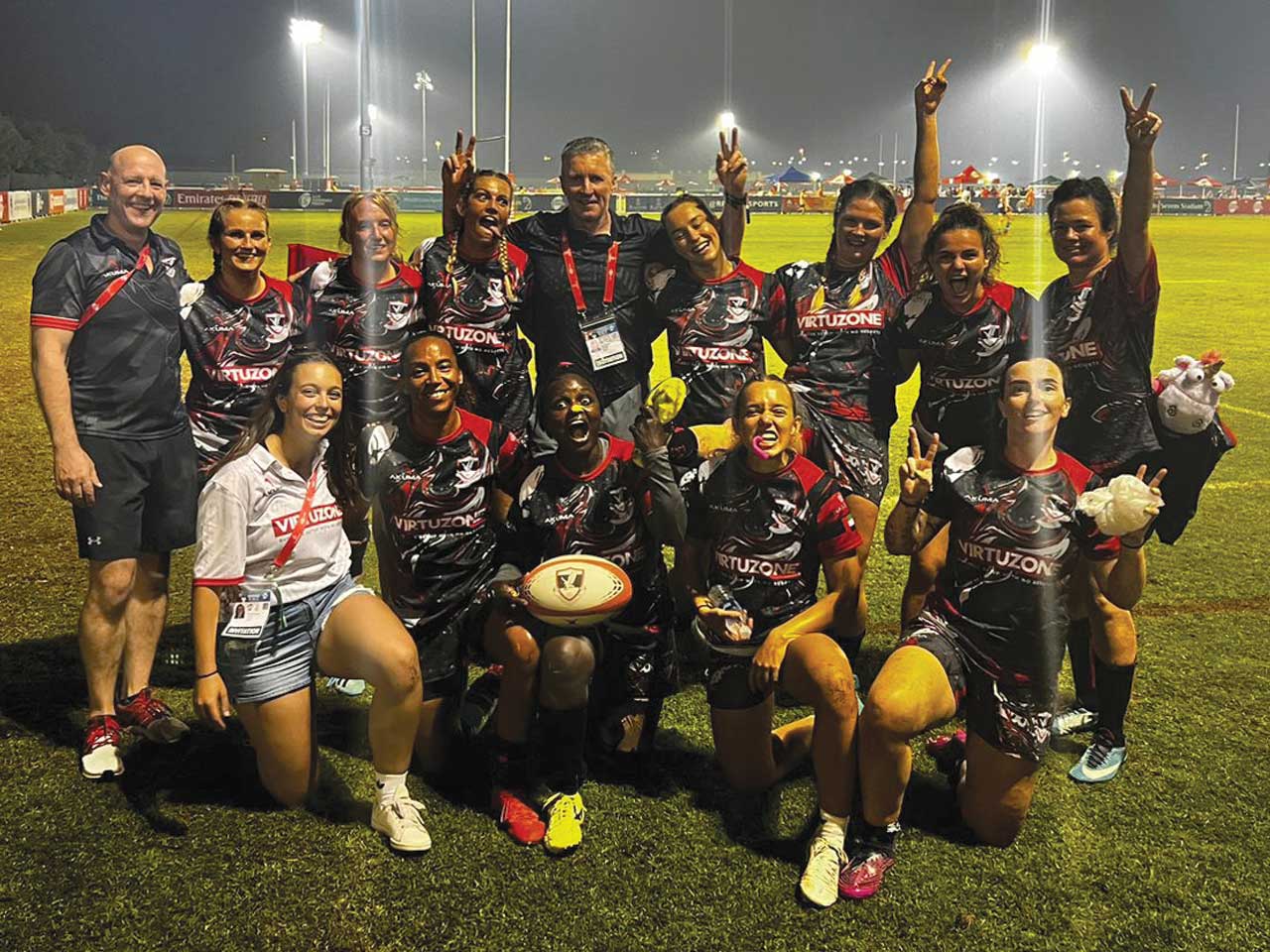 There was to be no repeat of the 2021 Emirates Dubai 7s heroics for the Dubai Exiles senior men in this years Gulf Men’s League. Four wins out of six matches in the new ’round robin’ format proved one loss too many to reach the Cup Final on Pitch 1.

There were still an awful lot of ‘ups’ for the Exiles at this year’s Dubai 7s. For the first year, in a number of years, the Exiles entered a women’s rugby team in the Gulf Women‘s competition while the club’s young, and not so young, members continued to fly the Exiles flag in the world’s most prestigious tournament!

The qualifying rounds of the competition, open to under 13, under14, and under 16s were played in October at The Sevens Stadium and after two pulsating rounds of youth rugby both the Exiles Under 13s and Under 16s had managed to navigate their way to play their Cup Finals at the Emirates Dubai 7s.

The Under 13s Cup Final saw the two resident clubs of The Sevens Stadium go head to head in an enthralling match on Pitch 4 with the Exiles‘ youngsters getting over the wining line against the Dubai Hurricanes to lift the trophy.

The Under 16s Cup Final pitted the Exiles against the Dubai Tigers on Pitch 2 in front of a very excitable crowd. It was a strong performance by the Exiles‘ Under 16s that saw them collect the winners trophy and trigger a lot of celebrations!

It was a tough baptism for the Exiles Vets in the Gulf Vets competition. Opening defeats to the Abu Dhabi Harlequins and the Al Ain Amblers on day 1 had left some of the Exiles‘ Over 35s with very sore bodies!

A 22 – 0 win over the Hurricanes on day 2 sent the Exiles Vets into a plate semi-final against Bahrain‘s ‘Golden Oldies’. When the final whistle was blown a 5 – 17 win for the Exiles had booked themselves a place in the Plate Final against Abu Dhabi French.

The Exiles Vets and Abu Dhabi French had met in the earlier rounds of the tournament, the AD French squeezing past with a 0 – 7 win on the Friday. The Plate Final was another close match but this time it was the Exiles that got across the finish line with a 10 – 5 win!

Exiles U19 Boys made the Cup Final on Pitch 1

The Exiles Under 19s had got out of their starting blocks at quite a pace, a big opening win over Abu Dhabi French by 45 – 0  was quickly followed by a 27 – 0 win over another school side, WSO Falcons by 27 – 0. The final match of the Thursday round of games was a pre-cursor to the final, the Exiles side going down 19 – 5 to a very well organised JESS (Jumeirah English Speaking School).

The first game of the Friday was arguably the biggest game of the day, Exiles U19 up against last years finalists and frequent winners, Dubai College A. An absolute belter of a game saw the Exiles Under 19s steal the game at the death with a last kick conversion and a 17 – 15 win.

A 15 – 0 win over Dubai College B in the semi-final and the club side was on Pitch 1 against JESS who’d beaten Dubai English Speaking College by 21 points to 12 in their semi-final.

In what was a repeat of the Thursday game it was JESS that took the Cup Final trophy with the same scoreline, 19 points to 5.

Exiles Netball prove to be Diamonds!

It wasn’t all rugby at this year’s Emirates Dubai 7s, Exiles Netball had three teams entered competing in the Gulf Women’s League and the Gulf Women’s Open. In the Open Exiles Scoreberries made the Plate Final but lost out to a very good Panthers side 4 – 10. In the Gulf Women’s competition the Exiles Diamonds held their nerve under pressure by winning the Bowl Final 9 – 2.

Congratulations to everybody who took part in this year’s tournament!