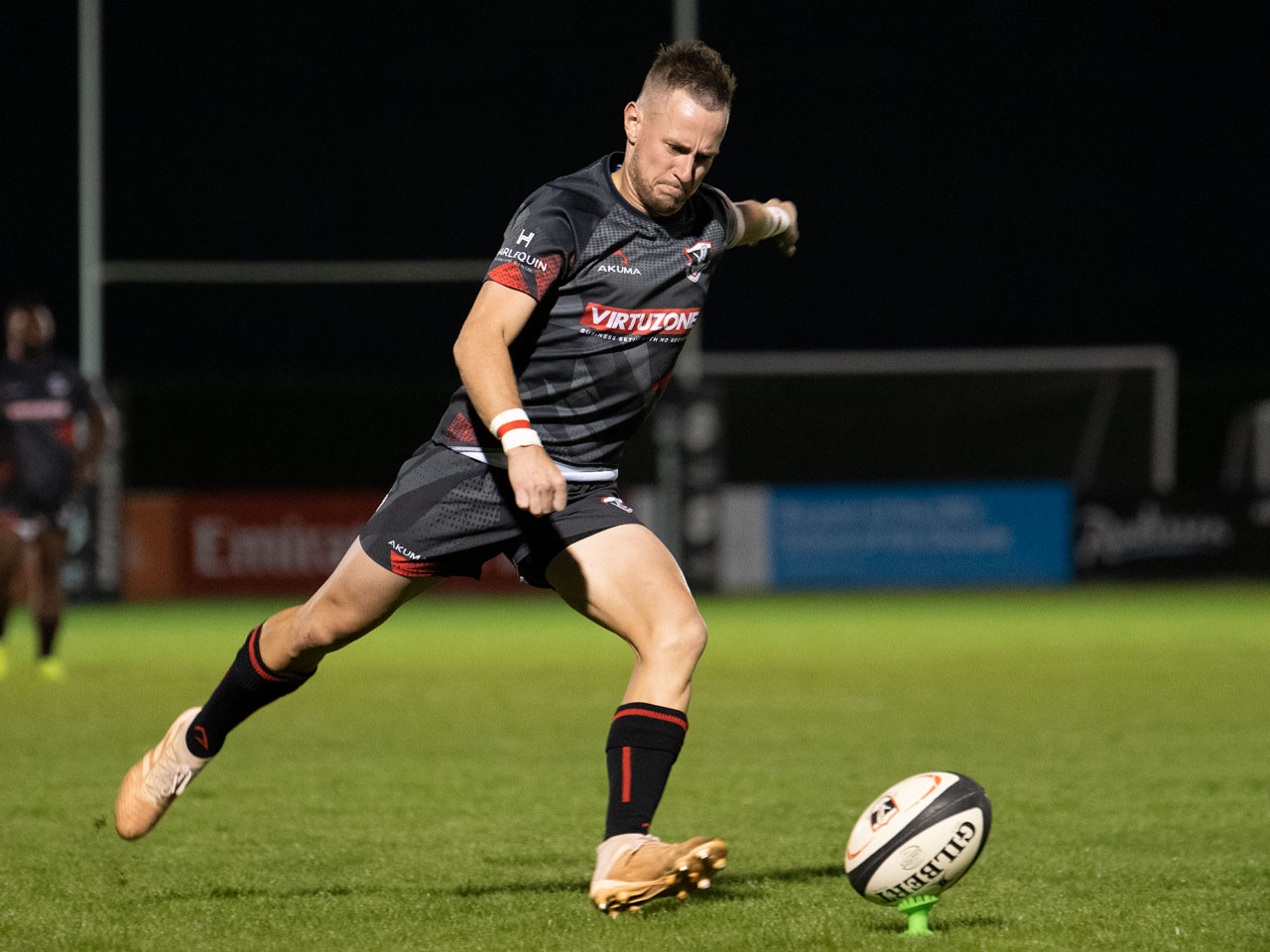 West Asia and UAE Premiership rugby made a welcome return after the Christmas break with the visit of the Jebel Ali Dragons to Dubai Exiles‘ pitch 7 at The Sevens Stadium. On their trip to Jebel Ali Shooting Club earlier in the season the Exiles had gone down 29 – 27 to a fired up Dragons side. With Number 8 Jean Botes and flanker Epeli Davetawalu returning after suspension and newcomers Moeneeb Galant and Handre Snetler signed in the December transfer window, there was an anticipation to see a much improved Exiles performance in the opening Premiership fixture of 2023.

Jaen Botes scores the first of the Exiles‘ 10 tries

A good crowd had gathered at The Sevens Stadium for the visit of the Jebel Ali Dragons. With a quick blast of the whistle from referee, Tony Duminy, Exiles‘ Number 10, Handre Snetler, got the game under way. Schalk Du Preez, making his return to Premiership rugby after an injury sustained in January ’22, almost opened the Exiles‘ scoring in the first minutes of the game. After showing a clean pair of heels the Exiles‘ flyer was scragged in the Dragons‘ 22, a speculative and looping pass couldn’t be gathered and the Dragons were awarded a scrum.

The first scrum of the match was a sign of things to come. The Dragons were judged to have collapsed it and the referee awarded what would be the first of 20 penalties, and untold penalty advantages, against the team in blue.

Another penalty to the Exiles and a scrum opted for. From 5 metres out the Exiles drove over the Dragons try line and Number 8, Jaen Botes, announced his return to Premiership rugby with the opening score. Converted by Handre Snetler. 7 – 0 to the Exiles.

John Donnan goes on the charge

Despite the final scoreline, it wasn’t one way traffic in the opening 20 minutes of the match. The Dragons were very well organised in their attacks and looking to move the ball to the edges of the park. It was only some desperate cover defence from Exiles‘ Brad Owako that stopped the Dragons replying with a score almost immediately. A Dragons‘ lineout, a charge, a penalty to the Exiles and an opportunity for the men-in-black to exit their 22.

The ensuing lineout was missed and the Dragons were once agin on the attack, looking to move the ball out wide again, it was the crime of lateral running from the Dragons that allowed the Exiles to easily bring a stop to any progress.

A penalty signalled the best attacking period of play for the visitors to pitch 7. It was excited and hard hitting defence led by John Donnan, Jaen Botes, and Epeli Davetawalu that forced the Dragons‘ attack from the Exiles‘ 5m line back outside the 22 until the inevitable penalty came.

Handre Snetler‘s clearance kick signalled the end of the Dragons‘ 10 minute period of attack and after a scrum on the Dragons‘ 10m the Exiles‘ new signing slotted a penalty from almost 40m out. 10 – 0 to the Exiles.

From the kick off Jaen Botes made his considerable presence felt again, in a run reminiscent of Mark ‘Scooby’ Jones for Neath RFC against the All Blacks in 1989 he bowled over three Dragons players and earned the Exiles another penalty.

Two minutes later and the Dragons were down to 14 men after a blue shirted player put in a very late hit on Exiles‘ full back, 19 year old, Alfie Wilson.

Exiles‘ heavyweights, John Donnan, Jaen Botes and captain, Pieter Killian wreaked havoc in the Dragons‘ defence before Epeli Davetawalu bulldozed his way over the try line. Converted by Handre Snetler. 17 – 0 to the Exiles.

The Exiles two opening scores had come through hard and bludgeoning attacks from the forwards, the third try was a little bit of magic from Exiles‘ centre Brad Owako and full-back, Alfie Wilson.

Almost immediately from the restart a clearing kick from the Dragon’s 10 was taken cleanly by Alfie Wilson, a pass inside to a supporting Brad Owako who took several Dragons‘ defenders out of the game before passing to a supporting Alfie Wilson. Converted by Handre Snetler. 24 – 0 to the Exiles.

With time ticking down on the game clock, the Exiles once again were on the attack in the Dragons‘ 22. The dominant Exiles scrum was causing all sorts of problems for the visitors. Hard running from flanker Cornelis Steyn created the initial surge and with the Exiles forwards dominating proceedings Dave Gairn drove into the Dragons‘ defence, scrum half Carel Thomas delivered the ball Pieter Killian delivered a perfect pass that gave Epeli Davetawalu all the space he needed and the powerful Fijian power over for his second try. 29 – 0 to the Exiles.

The final word of the first half fittingly went to Exiles‘ Number 10 Handre Snetler, yet another penalty from the Dragons. Their ninth of the first half was calmly slotted over. 32 – 0 to the Exiles. Half Time.

When Anthony Kapp ripped the ball out of the hands of a Dragons player in their own 22 the speedy centre, more familiar with playing in the back row, crossed to score in the corner in the opening two minutes of the second half. It signalled the flood gates beginning to creak open. 37 – 0 to the Exiles.

The front row changes continued the dominance of the Exiles‘ scrum over the Jebel Ali Dragons and just a few minutes after ‘Kappy’s’ score, Jaen Botes was across the line for his second try of the match. Converted by Handre Snetler. 44 – 0 to the Exiles.

Cornelis Steyn gets into a headlock

The Dragons were next to rattle the scoreboard. the Exiles had inevitably relaxed a little and against the run of play the Dragons‘ wing had got his hands onto the ball and scored under the posts after outstripping the Exiles defence from 60 metres out. Converted. 44 – 7 to the Exiles.

Another penalty to the Dubai Exiles. With the clock stopped for an injury to a Dragon’s player the Exiles brought 17 year old scrum half Fourie Du Preez, the younger brother of Exiles‘ wing, Schalk Du Preez on for his UAE Premiership rugby debut. Fourie has enjoyed a great season with the Exiles‘ Under 19s, a season which has also seen the young scrum half represent the UAE on the international stage at Under 20s.

The youngster made an immediate impact. Taking on the Dragons defence from the base of th dominant Exiles‘ scrum. A couple of quick phases later and flanker Cornelis Steyn was across the try line. 49 – 7 to the Exiles.

It was another teenage debutant, Kahurangi Emberson, who scored next for the Exiles. ‘Kahu’ is another Exiles‘ Under 19 who represented the UAE on the international stage this season. Exciting performances for the Exiles Under 19s on their way to the final of the Emirates Dubai 7s in December had seen the young wing selected in the starting 15 for his first Premiership match.

A sliced kick from the Dragons back line was collected by Emberson who carried the ball into contact. A quick recycle and the Exiles were in space on the far left side of the pitch. Anthony Kapp found himself in the open and after beating one defender off loaded to a supporting and very pacy Fourie Du Preez, an offload to ‘Kappy‘ and then a pass inside to Kahu Emberson, who’d made up the 20 metres, saw the dancing feet of the youngster salsa over the line. 54 – 7 to the Exiles.

It’s no secret to anybody involved in UAE rugby that it’s long been a policy for the Dubai Exiles to bring through youngsters from within the club and to give them the opportunity play Premiership rugby. In a match that saw six players make their Premiership debut the final teenager introduced to this game was 17 year old Max Allen-Paver.

Max has been with the Exiles since Under 5 and is another Exiles Under 19 who received international honours by representing the UAE earlier in the season.

Two late scores for the Exiles cemented their dominance. Exiles‘ captain Pieter Killian bagged himself a well deserved score after putting in a tremendous shift, converted by Handre Snetler. 61 – 7 to the Exiles. While the final try of the match, the Exiles‘ tenth went to flyer, Schalk Du Preez. 66 – 7 to the Exiles. Final Score.